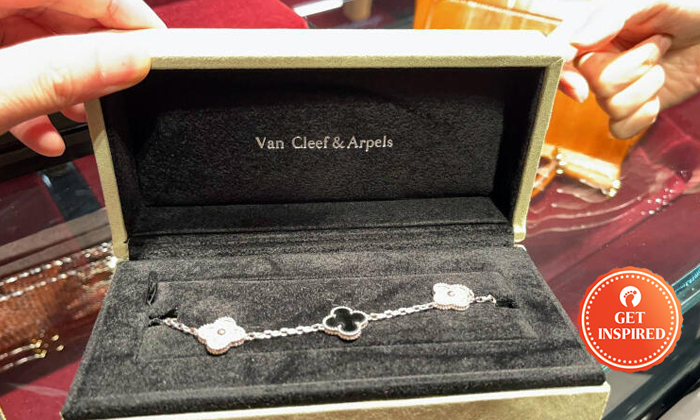 A man panicked after losing a luxury necklace that belonged to his friend, but was fortunately reunited with it thanks to the kindness of a restaurant owner.

Chinese national and salesperson Mr Pei, 32, told Lianhe Wanbao that the shock of the loss caused him to break out in cold sweat.

A friend had sent Mr Pei a WeChat message last Wednesday (Nov 25), seeking his help to collect a platinum necklace worth S$20,000 from a high-end jewellery shop at ION Orchard and send it back to him in China.

"The necklace was made by a famous French artist. My friend had sent it to the Singapore store for maintenance," said Mr Pei, who went to Orchard Road to pick up the accessory at 9pm that same day.

Shop staff kept the necklace in a box, which was then placed into a small black bag.

Aware of the necklace's value, Mr Pei said he held the bag carefully in his hand the whole time.

He then went to a barbecue restaurant near Aljunied MRT station to get dinner for his girlfriend and himself.

As the restaurant was full and its staff were busy, Mr Pei paid for his order and went outside the restaurant to wait. He went back in to collect his food when an employee informed him that it was ready.

Mr Pei, who had some personal matters on his mind, completely forgot about the necklace.

Carrying his bag of food, he walked 200m to Aljunied MRT station to pick up his girlfriend. It was only then when he realised that the necklace was no longer with him.

Horrified, Mr Pei retraced his steps but saw no sign of the necklace.

He recounted: "I was feeling desperate after searching for an hour, when the boss of the barbecue restaurant called and told me that he had found the necklace.

"I heaved a sigh of relief and immediately returned to the restaurant to retrieve the necklace."

Restaurant boss Dong Jingwu, 34, said he had checked his shop's CCTV footage and conducted a search along the same route that Mr Pei took.

After half an hour, he eventually found the black bag containing the necklace on a motorcycle case, which was also black.

Mr Pei added: "I was really anxious because the necklace is so expensive and it would take 10 months of my salary for me to pay it back.

"Mr Dong knew how valuable the necklace is but did not take it for himself. It's really rare. I wanted to treat him to dinner to thank him, but he declined."

Related Stories
'I wish him well': Lovely uncle goes out of his way to return phone that student left on bus
Stranger travels all the way to elderly woman's house to return lost wallet with $400 cash
Grab driver shocked to get $100 reward and warm hug from passenger for returning phone
More About:
inspiring
kind
kudos
heartwarming
expensive
luxury
restaurant