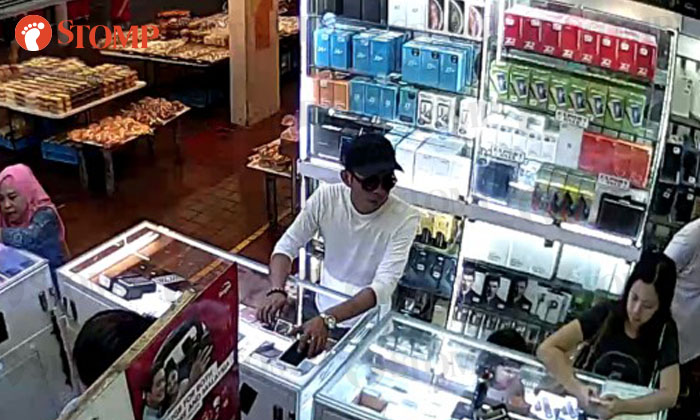 A man was caught on camera stealing a phone from a store at Block 811 Hougang Central on Nov 25 at about 11.51 am.

Stomper Kelvin, a worker at the store, sent Stomp CCTV footage of the incident.

In the video, an employee is seen wiping the screen of a gold Oppo R9 that the customer in front of him intends to buy.

According to Kelvin, the employee and customer step outside to take a mobile phone case.

When they step out, a man in shades and a cap enters the store and takes the unattended phone.

When the employee and customer return, they look around the store for the lost phone.

The second-hand phone, which was to be sold at $200, had not been paid for yet by the customer.

The employee lodged a police report at about 4pm that day.

In response to a Stomp query, the police said: "On Nov 25 at 3.37pm, the police were alerted to a case of theft in dwelling at Block 811 Hougang Central. Police investigations are ongoing."

Kelvin added: "I have many friends working nearby at shops which sell phones as well. I told them about what happened and to keep an eye out for the man in shades."

Related Stories
Woman tries on $69 shoes at Clementi store and walks off in them -- leaving own slippers behind
Man who took $99 bluetooth headset at AMK Hub, you have till Sunday before staff makes police report
Teens allegedly stole alcohol while injured friend distracted owner, returned to ransack shop at night
More About:
theft
Hougang
shop theft