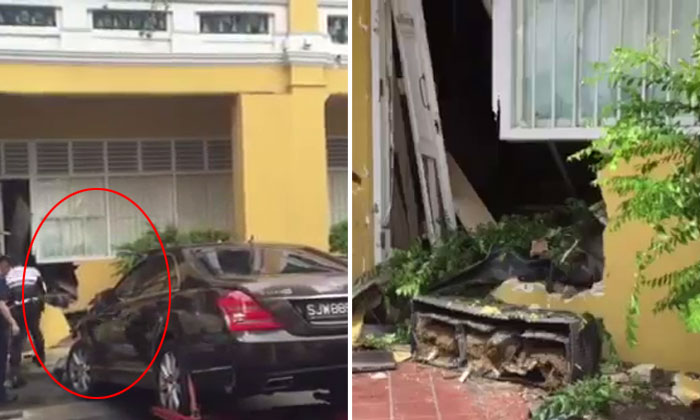 A man in his 80s lost control of his Mercedes and drove into the side of a restaurant in the Chinatown area on Monday (Jan 2) morning.

ST reader Faruk Ali, a 38-year-old taxi driver, told The Straits Times on Monday that a car had rammed into a two-storey shophouse opposite the New Majestic Hotel.

There were no reported injuries, and the crash took place opposite the Ee Hoe Hean Club, one of Singapore's oldest millionaire clubs.

The affected restaurant is Italian eatery Oso, which will be closed on Tuesday due to the accident. It was closed when the crash happened but its staff were inside as its neighbouring restaurant, Oso Grillery, was hosting an event.

"I was shaking, it happened in front of me," said Ms Cali Serrajotto, a guest relations manager at Oso, who was in a cab about a metre away from the restaurant's side entrance when the accident happened.

"When I alighted, it went straight in (to the building). It was very, very fast. Then, there was smoke," she said, adding that the driver had looked flustered in his car before it shot forward.

She said: "We turned off all the gas pipes."

Mr Diego Chiarini, director of Oso, added that staff evacuated the building after the crash. The authorities, including the Building and Construction Authority, have been involved in the aftermath.

According to Oso's website, the affected building is a conserved building.

While Mr Chiarini did not know the extent of the damages yet, he added that "it was only the entrance" that was affected.

Said valet driver Mr Ab Razak, 57, who works in the building where the Ee Hoe Hean club is: "It seems that the driver reversed and hit a wall (at the building), before he panicked and crashed the car."

He added that the driver was a regular at the club.

SCDF's spokesman said they received a call for assistance at about 11.10am at 46 Bukit Pasoh Road and dispatched one fire engine, one Red Rhino, one ambulance and two support vehicles to the scene.

"The driver, a man in his 80s, has no reported injuries and was not taken to hospital," said the spokesman.