'Drink driver' evades roadblock in Serangoon, drives against traffic, and ends up in a ditch 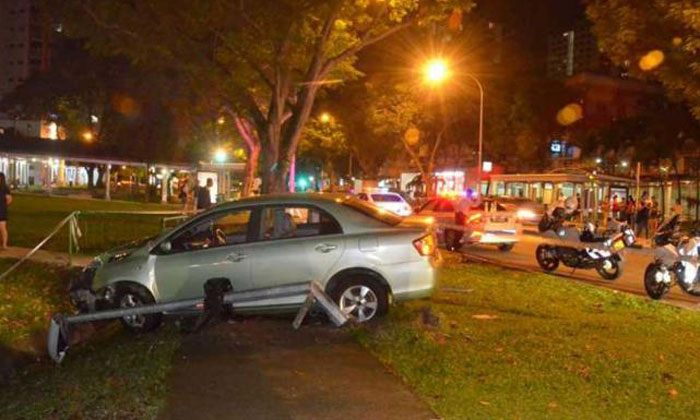 Police gave chase when a man suspected of drink driving evaded a roadblock in Serangoon on Friday (Dec 30) night, and then crashed into a lamp post and a street electrical box as he attempted to speed away.

But the 46-year-old man ended up driving into a ditch. He then got out of his car and tried to run away on foot but was eventually subdued by four policemen.

The incident took place at about 11pm in the Serangoon area on Friday.

Responding to The Straits Times on Saturday (Dec 31), the police confirmed that a roadblock was conducted along Petain Road on Friday.

One suspect had sped off to evade the roadblock, said the spokesman.

"In the ensuing pursuit, an accident involving the said vehicle and government property owned along Owen road occurred," he said.

A 46-year-old man was arrested for traffic-related offences, he said.

The Singapore Civil Defence Force said it was alerted to the accident at about 11.10pm. The driver was taken to Tan Tock Seng Hospital.

A Shin Min Daily News report on Saturday said that the man was chased by seven police vehicles for more than 1km. He drove against traffic at one point before mounting the kerb along Owen Road.

An eyewitness who gave his name as Mr Chen told Lianhe Wanbao on Saturday that the car was going "extremely fast" before the driver lost control and drove it into the ditch.

A resident who gave his name as Mr Xu told Shin Min that he heard police sirens followed by a loud bang.

The 42-year-old architect said he saw a car on the grass, with five police cars and two police bikes parked by the road.

"The driver got out and ran towards a void deck, but was pinned down by four policemen," he said.