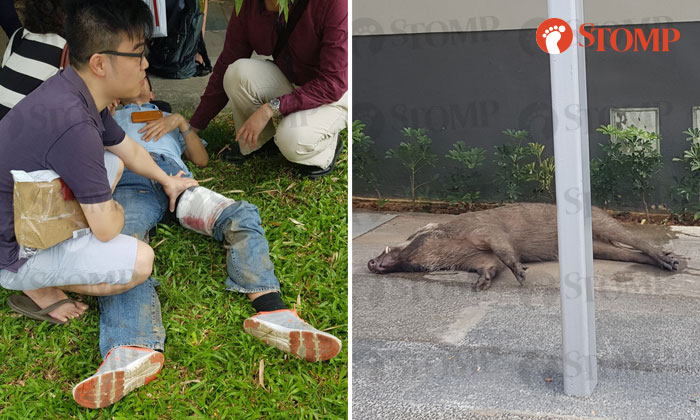 Stomp understands that the wild boar that bit a man at 25 Hillview Avenue today (Oct 19) was later hit by a bus and died.

Prior to the accident, the 44-year-old victim of the boar attack was walking along a pavement when he saw the animal charging towards him.

He fell down and was subsequently bitten on his left leg.

The wild boar later ran away and got hit by a bus around 70 metres from where the attack took place.

Stomper Raymond was driving past the area when he saw the attack taking place.

In a telephone interview, he reported seeing the wild boar, which he described to be 'bloody huge', charging at the victim multiple times.

He then stopped his car with the intention of chasing the wild boar away. When he alighted, however, the animal had already fled.

Raymond told Stomp that the victim had a huge, deep gash on his left thigh. He subsequently patched up the man's wound with a first-aid kit from his car.

Paramedics later arrived to render assistance, said Stomper Sharafu who was at the scene following the attack.

Photos sent by both Stompers show the wild boar lying motionless under a sheltered walkway near a bus stop.

In response to a Stomp query, a spokesman for the Singapore Civil Defence Force said that the victim sustained cuts and lacerations on both legs.

He was conscious when conveyed to Ng Teng Fong General Hospital.

Images published by netizens Brianna Degaston and Ahmad Syarif show a police cordon around the area where the incident occurred.

There's a wild boar roaming near the residence, and apparently police officers need to arrest it. Wild boar, you commit serious crime :) pic.twitter.com/ib7ab9yYol

@STcom it's not everyday i find a pig on my way to the MRT.... pic.twitter.com/hBF1aF9kh0

An AVA spokesman said in response to the incident:

"Some possible measures that we are exploring, and intend to implement as soon as possible, include putting up signage about wildlife crossings at specific locations to warn motorists and erecting barriers to prevent wildlife from encroaching onto roads.

"The wild boar likely came from nearby forested areas.

"Wild boar sightings are not common in that area.

"AVA is monitoring the situation and is working with relevant agencies to put up signage.

"AVA is also working with the community to create awareness and educate residents on what to do when they encounter wild boars.

"AVA advises the public not to approach, disturb or try to catch wild boars.

"The public should keep a safe distance from the wild boars and avoid confronting or cornering them.

"Do not interact with the wild boars and keep young children and pets away from them."

Related Stories
Wild boar killed, 3 people sent to hospital after 3-vehicle accident along Lentor Avenue
Like a boars: Wild herd goes for supper at Tuas Interchange coffeeshop
Crocodile gets run over by truck in Brunei -- as it was eating wild boar
More About:
animal attack
wild boars
injured