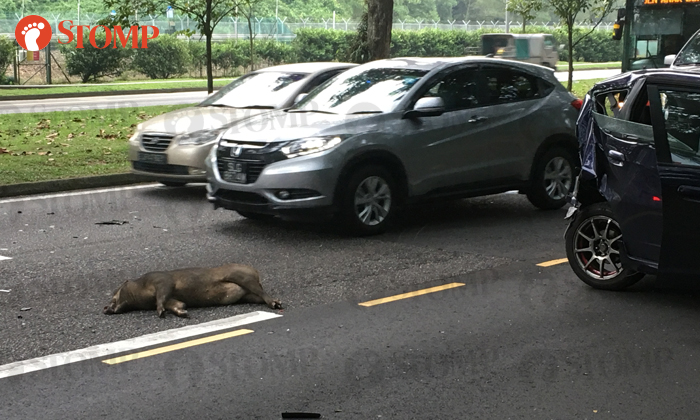 A wild boar was killed and three people were injured following an accident along Lentor Avenue towards Yishun Avenue 2 early this morning (Sep 29).

In response to media queries by Stomp, police said they were alerted to an accident involving two cars, a van and a wild boar at 6.59am.

Three people aged between 17 and 53 years old were conscious when conveyed to Khoo Teck Puat Hospital.

Stomp understands that a car had hit the wild boar and then left the accident site.

A second car that was right behind the first vehicle had braked upon seeing the animal on the road. A van then collided with the second car.

Stomper Armando was at the scene and said the accident resulted in a traffic jam, especially for vehicles that were coming from Seletar Expressway (SLE).

He added: "The wild boar is believed to have come from the lush vegetation/forest on one side of the road.

"One vehicle sustained a severely damaged hood while the other vehicle had its rear wrecked.

"The police and paramedics arrived shortly and assisted three people with minor injuries.

"There were no other casualties except for the pig, which died on the spot."

In response to media queries by Stomp, the Agri-Food and Veterinary Authority of Singapore (AVA) said: "Wild boars are often sighted near or around forested areas. AVA has received feedback on wild boars in areas such as Tuas West, Punggol and Lorong Halus.

"AVA will work with the relevant authorities to place signages in areas where animals are known to appear. This will help to warn motorists of potential animal encounters on the road."