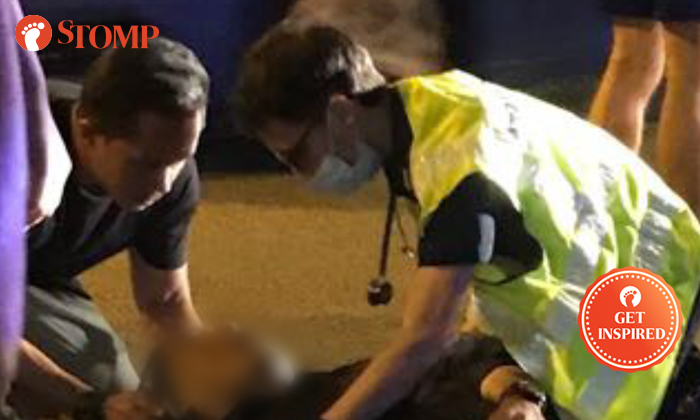 An abang who stopped to render assistance to an injured motorcyclist warmed Stomper Ian's heart.

Ian was on his way home from fetching his son when he came across an accident at Tampines Street 11 between a couple on a motorbike and a cyclist at around 7pm on Nov 17.

The accident left one of the motorcyclists seriously injured and lying on the floor in pain.

In a telephone interview with Stomp, he elaborated on what he saw:

"A crowd had gathered around the injured motorcyclist but no one was helping. Fortunately, this abang who was driving stopped his car and came to render assistance."

Ian told Stomp, "He was very calm and very professional. He instructed a lady to call an ambulance and helped to control the crowd."

Ian also said that the man had helped to check the victim's body for any broken bones.

"I heard him introducing himself to someone in the crowd that he is an off-duty SCDF officer."

"He was very calm and professional."

"He even calmed the victim's wife who was also hurt and distraught," said the Stomper.

Paramedics arrived shortly and the injured motorcyclist was conveyed to Changi General Hospital, according to the Singapore Civil Defence Force. (SCDF)

He had much praise for the abang's actions, adding, "I think it's quite amazing. He managed to set everything aside just to help a stranger. You've truly restored the humanity in front of the rest of the crowd."

Related Stories
Members of Team Diversion Singapore perform first aid on injured rider -- whom other motorists forgot about
Singaporeans from all walks of life help old man who fainted and knocked his head on pillar at Boon Lay
SAF serviceman gets Letter of Appreciation for help in arrest of man allegedly taking upskirt videos
More About:
get inspired
kind