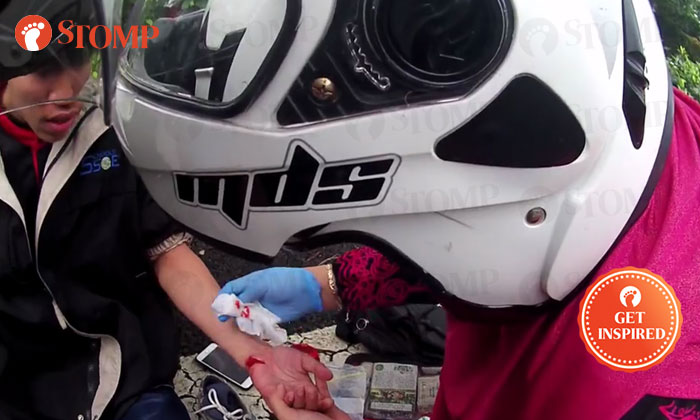 Stomper Erica wanted to highlight how a motorcyclist and his pillion passenger helped a fallen rider on the Pan-Island Expressway (PIE) on Nov 13 at around 7.20am.

She alerted Stomp to a video posted on Facebook page, Diversion Escort by Team Diversion Singapore, a group of bike enthusiasts riding bikes similar to those used by the Traffic Police.

In the video, the motorcyclist stopped his bike where a multiple-vehicle collision had taken place.

Motorists were checking their vehicles for damage and talking to each other but one injured rider was sitting by the side of the road alone.

The Team Diversion member and his female pillion rider got off the bike and took out a first aid kit to tend to the fallen motorcyclist.

He had suffered cuts and abrasions on his palms, elbow and foot.

The man and woman worked together to help clean the biker's wounds and to apply bandages to the affected areas while waiting for paramedics to arrive at the scene.

Once medical officers arrived, they continued on their way.

"While others were busy checking on the damages caused to their vehicle, they totally forgot about the injured rider, left at the side of the shoulder, sitting in agony trying to endure his pain caused by his injuries," said Erica. "Members of Team Diversion Singapore, once again, donned their 'superhero cape' and rendered their first aid assistance to the injured rider until the medics arrived."