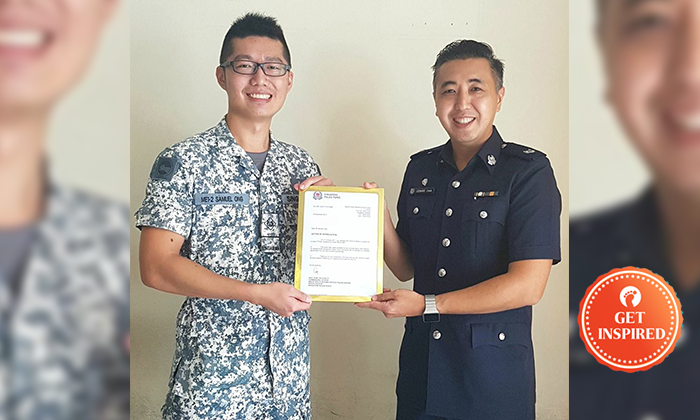 A 25-year-old Singapore Armed Forces (SAF) serviceman was presented with a Letter of Appreciation on Saturday (Nov 18) from the Singapore Police Force (SPF) for his assistance in the arrest of a man who allegedly took an upskirt video at Tanah Merah MRT Station on Oct 31, 2017.

According to a post on SPF’s Facebook page, Mr Samuel had noticed the 18-year-old man behaving suspiciously.

The man was standing close behind a young lady.

As Mr Samuel walked past, he saw that the man had a phone in his hand and was holding it beneath the woman’s skirt, with its camera facing upwards.

Mr Samuel immediately confronted the man while he called the police.

Officers from the Public Transport Security Command and Bedok South Neighbourhood Police Centres (NPCs) were dispatched and upon arrival, made a check on the man.

They found upskirt videos on the man’s phone.

The man was subsequently arrested for Public Nuisance and will also be investigated for taking upskirt photos.

In recognition of Mr Samuel’s civic-mindedness, the Officer-in-Charge of Community Policing Unit, Assistant Superintendent (ASP) Leonard Chan from Bedok South NPC presented him with a Letter of Appreciation on Saturday.

“We would like to commend Mr Samuel for his quick-thinking and timely interception that led to this swift arrest.”

Asked why he had stepped forth to help the lady, Mr Samuel said that he was trained as a member of the SAF to do what is right and the right thing to do at the moment was to help the lady in need.

Related Stories
Stomp talks to man whose $2,000 tip made waitress cry: "It's not about being rich"
Single mum working multiple jobs cries after getting $2,000 tip from kind S'porean guy
SBS employee and commuters rush to help man who had epileptic fit on train
More About:
inspiring
civic minded
SAF
SPF