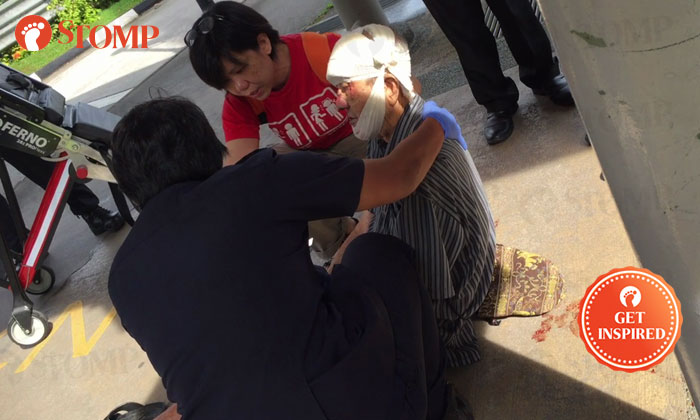 Stomper A was heartened when several people came to the aid of an old man who had fainted and knocked his head against a pillar, causing him to bleed profusely.

A was on his way to Jurong Point yesterday (Nov 8) at around 4pm when he saw several passers-by gathered around the man near a sheltered walkway at the junction of Jurong West Street 62 and Street 64.

The Stomper quickly went over and helped to shield the injured man from the sun with his umbrella.

In a video shared by A, the man could be seen bleeding from his forehead and nose and that he had suffered abrasions on his knees and the palms of his hands.

He was heartened to see several others doing what they could to help. Among them, a kind lady in a red T-shirt stood out as she was trained in first aid and was able to speak to the man in Cantonese.

"She was constantly translating from English to Cantonese so that she could help the injured man contact his wife," said the Stomper.

"A group of secondary school students from a nearby neighbourhood school were also attending to him as one of them called for an ambulance."

The Stomper added that the students also helped to wave at the ambulance when they heard it approaching so that the paramedics knew exactly where to go.

He commended the paramedics from the Singapore Civil Defence Force for "attending to the old man within minutes".

"The whole ordeal lasted around 15 minutes but I felt that amidst people who were shocked at the sight of the accident, Singaporeans of all walks of life came to help without any hesitation."

Were you there? Stomp would like to give out Stomp Goody Bags to the good Samaritans who stopped to help this uncle. Kindly email us at stomp@stomp.com.sg or WhatsApp 9384 3761.