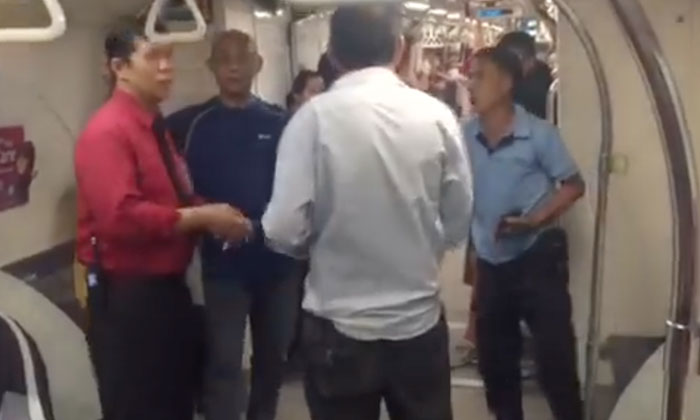 A video of two men arguing over a seat on the MRT train, with another commuter attempting to mediate the situation, has been circulating on Facebook.

The video, uploaded by Facebook user Philip Meow Eng Toon, shows an infuriated man in a white shirt shouting at a commuter wearing a blue shirt.

Another bespectacled man wearing a navy shirt was seen trying to mitigate the situation.

The man in white first shouted at the man in blue, who was sitting down.

“I am a high-class person. You are lowly filth!”

Despite the intervention of the bespectacled man, he continued screaming at the man in blue:

This prompted the commuter to reply angrily:

“I give birth to you! You are a bastard!”

The man then told the commuter, “You are a dog."

He explained to another commuter that the man had rushed forward and snatched his seat.

The bespectacled man advised the two to let the matter rest, saying that a simple apology would do.

However, the man in white was unwilling to let the matter rest, continuing to hurl insults at the man in blue.

He told the man in blue:

“You dare to touch me? You are just a lowly dog!”

Halfway through the argument, the man walked off, pacing around the cabin.

He noted that he was being captured on video and returned to the man in blue, whipping out his phone to take a video. 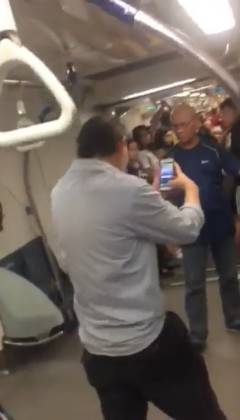 During the time, he could be heard saying:

The man in blue asked him why he was taking a video.

He added that there were empty seats, and he didn’t stop the man in white from sitting.

However, the man continued accusing him of stealing his seat.

An SMRT employee was seen approaching the three men to mediate the situation.

Despite his intervention, the man continued calling the commuter a ‘lowly trash’, and ‘country dog’.

he also told the employee that the man in blue had threatened him with a weapon.

After a minute, the employee left, with the man in white following him.

It wasn't long before the man in white returned, engaging in yet another round of argument with the man in blue.

The two accused each other of physical assault, while the bespectacled man told them:

“Enough is enough. Don’t say anything else.”

The video then ends abruptly.

According to Philip, the incident happened on a train along the East-West Line (EWL), however, Stomp is unable to ascertain the date and time.

Related Stories
Drivers go berserk and attack each other at Chinatown Point carpark, one even gets thrown down onto ground
Men in vulgar argument at Geylang Serai hawker centre, with one shouting: "This is my market!"
SingPost postman sacked after he was caught on video throwing away mail at condo
More About:
MRT
dispute
argument