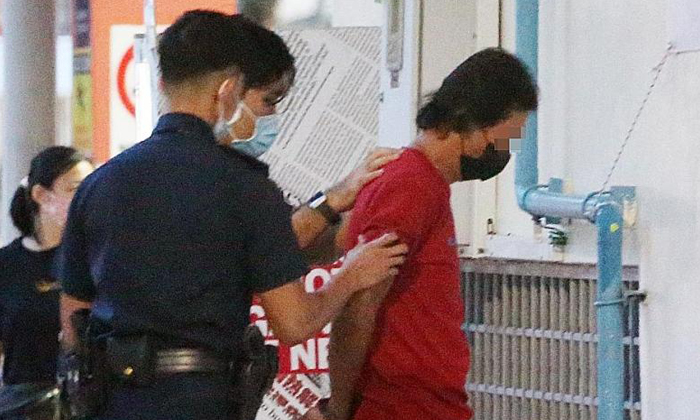 A 58-year-old woman was taken to hospital after a man allegedly hit her head with a metal cup.

The incident happened at Golden Mile Food Centre at around 5.30pm on Saturday.

The police said they were alerted to a case of rash act causing hurt. A 50-year-old man was arrested, and the woman was taken to Raffles Hospital. Police investigations are ongoing.

Speaking to Shin Min Daily News, the victim, who wanted to be known only as Ms Ho, said she runs a stall at the hawker centre with her siblings.

She said the man had approached their stall and asked for two toothpicks, which she agreed to give to him.

Seeing that he was not able to remove the toothpick from its holder, she told him he could pour it out instead.

But the man suddenly flared up.

She recounted: "He banged on the table and shouted that he knew (how to do it), and then started to hurl vulgarities."

Frightened, she told the man to stop, but he became even more agitated.

Ms Ho said the man walked away, turned back several times, and was cursing while pointing at her.

He then picked up a metal cup on the table and hit her head with it twice.

Several diners came to her aid and someone immediately called the police.

A nearby food vendor, who wanted to be known only as Mr Chen, said some of those who came to her aid were Certis Cisco officers who were in the area during their break.

About seven of them ran towards the man and stopped him from leaving.

Mr Chen, 31, said: "These officers usually patrol the area and come here to eat during their breaks."

When the officers told the man not to leave, he did not resist and calmly sat down to wait for the police.

Ms Ho said she did not suffer from any injuries.

It is the first time she had seen the man, but a patron who did not want to be named said he had seen him several times.

He said the man usually loitered at the hawker centre alone and often muttered to himself.