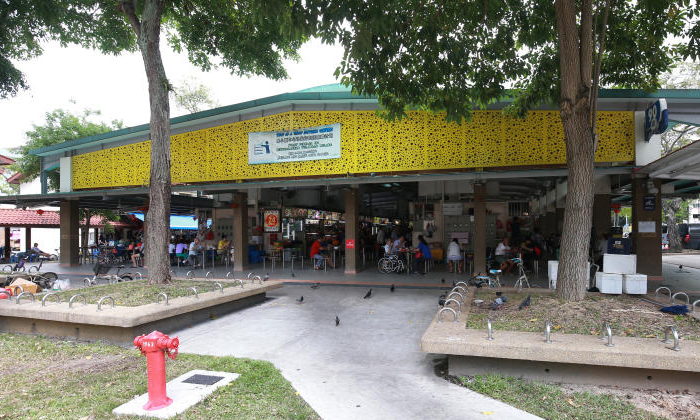 A "senseless" argument between two hawkers at Whampoa Market ended with a fishball noodle stall assistant splashing hot water on the chest of a prawn noodle stall owner.

The attack caused the victim to suffer severe burns that left her breast permanently disfigured.

The assailant, Kim Eng Suthivanich, 52, was initially cleared of a charge of causing hurt to the 46-year-old victim by means of a heated substance.

She was acquitted by a district judge, who accepted her contention that she did not know that the water was hot and was likely to cause hurt.

But the High Court reversed the acquittal in June following an appeal by prosecutors.

On Friday (Aug 21), Suthivanich was sentenced to 10 months' jail and ordered to pay compensation of $225.93 to the victim, Ms Leow Suat Hong.

The assault, described by prosecutors as a "vicious one-way attack", took place on Aug 13, 2017, and was captured on CCTV footage.

The court heard that Ms Leow had permission from the owner of the fishball noodles stall, Mr Sim Kok Soon, to borrow things from his stall and use his fridge.

Suthivanich, who was employed by Mr Sim, was unhappy that Ms Leow had taken cleaning lotion and a cloth from the fishball noodle stall but did not return them. Ms Leow denied taking the items.

On the morning of Aug 13, 2017, Ms Leow went over to the fishball noodle stall to get cooking ingredients.

An argument broke out between the two women, with Suthivanich raising the issue about the cleaning lotion, while Ms Leow said she did not take it.

Enraged, Suthivanich told the victim to get out of the stall.

She then grabbed a ladle, scooped water from the stove and splashed it at the victim multiple times.

When Ms Leow ran out to call the police, Suthivanich went in pursuit and used the ladle to knock the phone from the victim's hands, which fell to the ground and cracked.

The victim was later given 17 days' medical leave for her injuries.

In June, High Court judge Aedit Abdullah convicted Suthivanich, saying that the acquittal went against the weight of the evidence.

"This was, after all, a stall serving hot food," said the judge.

On Friday, the prosecution sought 12 months' jail, arguing that the scalding not only left the victim's breast permanently disfigured but also caused her to suffer psychological and emotional trauma.

The injuries caused her to lose self-confidence and affected her ability to start a relationship for fear that her partner will leave her as her body is "incomplete", said submissions by Deputy Public Prosecutors Bhajanvir Singh and Delicia Tan.

Related Stories
3 men fined over 'meaningless' fight outside MBS casino: Dispute was over taxi, not woman
Man allegedly threw plate of rice at cleaner and pushed her after she cleared his coffee away
Man beats up tofu auntie from neighbouring stall at Marsiling market after drinking with friends
More About:
court
dispute
argument
assault
attack
hawker centre