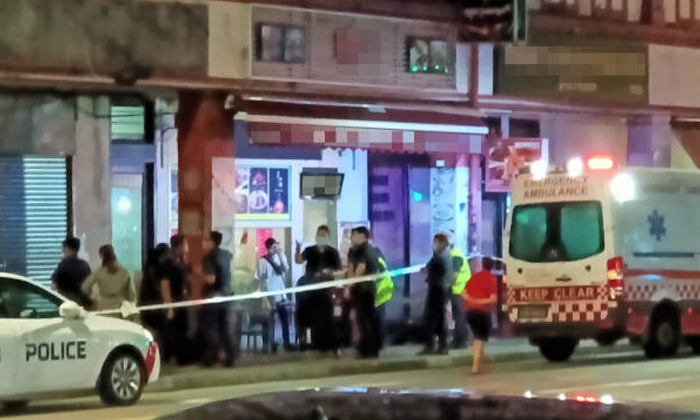 Four men were arrested after a violent dispute outside a hotpot restaurant along Geylang Road on Monday night (Nov 2).

The police told Stomp that they were alerted to the dispute at around 10.30pm.

A 45-year-old man was conscious when taken to Singapore General Hospital. He was subsequently arrested for voluntarily causing hurt by dangerous weapon.

Three other men, aged between 43 and 50, were arrested for public nuisance.

An employee at a nearby shop told Lianhe Wanbao that the hotpot restaurant's former boss would occasionally return to dine there even though the business has changed hands.

Xu Zunrong, 49, said: "The ex-boss was having a drink with friends outside the hotpot restaurant when he started arguing with a man in a black shirt who had been dining with him.

"Two to three guys, including, the man in black, started hitting the ex-boss."

Xu said the ex-boss was beaten until he fell to the ground. A woman from the same group rushed forward to shield him with her body, but was assaulted too.

Someone then brandished a 10cm fruit knife, added Xu. However, he could not see who was wielding the knife as the scene was too chaotic.