Man fishing on boat caught in thunderstorm, thankful for police and ferry crew who came to his rescue 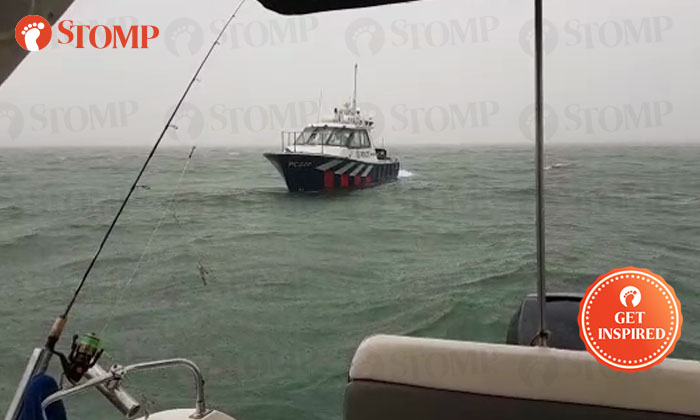 Stomper Anthony and his friend were fishing on a drifting craft when the sunny weather suddenly morphed into a thunderstorm, but luckily for them, a "Silver Angel" came to their rescue.

The duo was drift fishing at about 8am on Sep 4 at the area between Pulau Ubin and Changi when the "bright and cheery" weather became cloudy after about an hour.

(Video was taken before and when the storm just started)

Anthony said: "We set off in the morning when it was bright and cheery but after an hour the sky started to change colour.

"It became windy and the drizzle started pelting on us.

"When I cranked the battery of my craft, there was no response. The battery was totally 'conked' out.

"I tried lowering the anchor but it stopped abruptly after about 5m or so and I can see my craft drifting towards the Fairway, which is a busy navigation channel.

"My first instinct was to call the Police Coast Guard (PCG) for assistance. At the same time, I also tried rowing backward with the paddle but it had no effect because the current was too strong.

"The gentleman who manned the hotline was very cool, understanding and comforting. He kept on assuring me that help will be here very soon.

"When the Team Leader of PC220, Senior Staff Sergeant Ashraf contacted me via mobile, they were near the coastal side of Changi.

"He asked for my location and whether I could see him. I saw his craft blinking lights and guided him to us.

"The first thing he said was 'not to worry, we will stay by your side to ensure your safety', and he kept pacing up and down and even sounding the horn several times.

"It was this time that the sea got very choppy and visibility is limited to about 3m or less.

"As the current is pushing our craft further and further away, SSS Ashraf decided to moor our craft to his and his two teammates came out in the pouring rain, without any raincoats, to help secure my craft.

"They stayed with us during the most dangerous period, with low visibility, heavy downpour and very strong current with vicious pounding waves rocking the craft violently."

Anthony told Stomp that the actions of SSS Ashraf really provided him with a sense of comfort.

"Later we were towed to a mooring buoy and we requested to be moored to a Singapore-registered ferry. We drifted towards the breakwater at the end of Pulau Tekong.

"There was a ferry parked there that was waiting to fetch the construction workers from the breakwater to land.

"The captain of the ferry, Untong, was very willing to offer his assistance to charge our [craft's] battery, so were his two wonderful and helpful co-workers.

"The captain then invited us onboard his ferry for lunch and coffee while waiting for the charging to be completed.

"I salute SSS Ashraf for his concern and thoughtfulness. About two hours later, he even called to enquire whether everything is alright. Kudos to SSS Ashraf!

"I extend my appreciation to the crew of PC220, the crew of the ferry and the Maritime and Port Authority of Singapore."