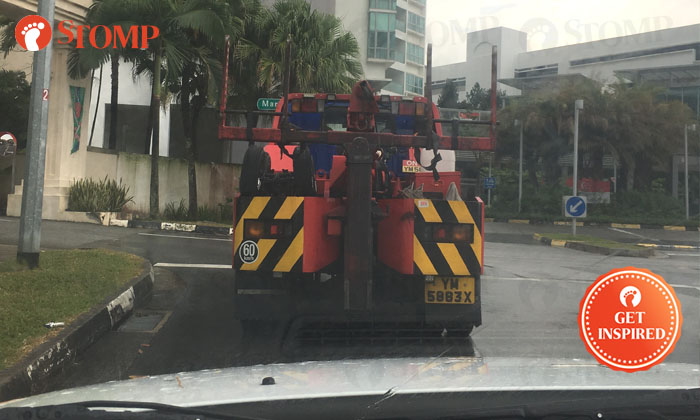 Stomper Hwey Miin's heart pumped fast in fear after her rented car stalled right in the middle of the lane along Marymount Road, but thank goodness for an uncle from a towing company who came to her rescue.

The incident happened at about 11.15am last Friday (Aug 24), and merely two weeks ago, a lorry had smashed into Hwey Miin's car from behind while she was waiting at the junction for the red light to turn green, hence the fear of it recurring.

She said: "While I was waiting inside the car for the personnel from the rental car company to come, I was very fearful that the same scenario will happen again.

"My heart was pumping fast, seeing cars and buses braking behind my car.

"After a while, a tow truck stopped in front the car. The uncle came down and said he will tow the car to the side of the road because it is safer.

"He was just passing by, it was drizzling and he didn't have to stop for me.

"He stayed for about five to 10 minutes and before he left, he even checked to make sure I had called the rental company, and told me to wind down the windows and wait inside the car since it was drizzling.

"I'm just surprised that someone would stop for me and I was also relieved, especially after what happened two weeks ago. There were also many vehicles and the road was also slightly downwards-sloping, I was scared that the vehicles wouldn't be able to stop in time.

"I forgot to get his name but I couldn't forget how relieved I felt because of his kind gesture. I also saw that 'Peng Towing Company' was written on the side of the truck.

Related Stories
Passers-by band together to help push uncle whose PMD got stuck on slope
Yio Chu Kang Sec schoolgirls help auntie struggling with elderly man on wheelchair and her bags
Woman looking for 3 'angels' who responded to her dad's call for help after he felt breathless while driving
More About:
kind
inspiring