Man finds screw in bottle of fried garlic: 'What if I had swallowed that?' 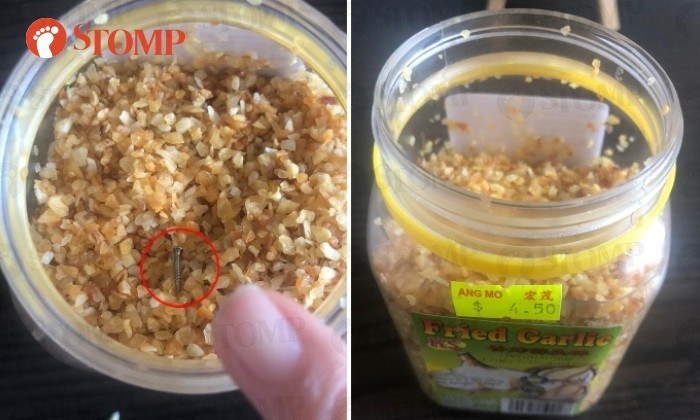 A man was shocked when his wife told him that she spotted a foreign matter in their bottle of fried garlic.

His shock turned into horror when he realised that it was actually a screw.

Stomper Anonymous shared that he bought the fried garlic from Ang Mo Supermarket in Toa Payoh and was about to use it for lunch on Nov 5 at 11.30am when he wife spotted the screw. 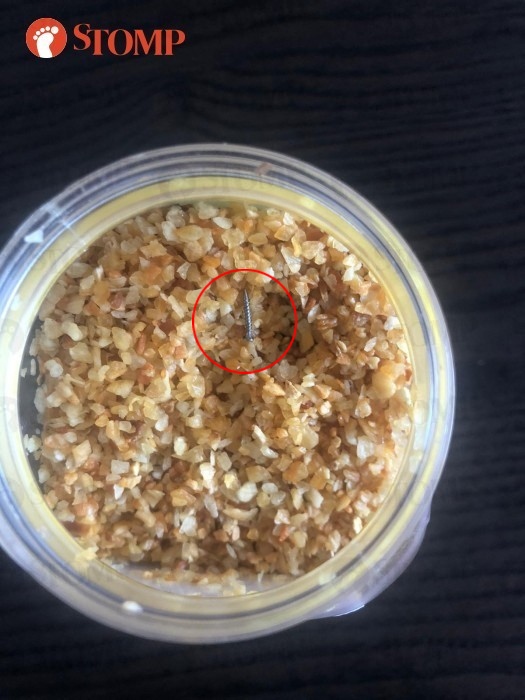 In the photo, a screw about the length of a fingernail can be seen in the bottle of fried garlic.

"I purchased the bottle of fried garlic around two weeks before my wife and I noticed the screw inside it," Anonymous said.

"We like this brand of fried garlic and have been buying it for about one year. This has never happened to us before."

The Stomper added that this incident has made him become more cautious with food.

"I can't imagine what would happen if I just poured the fried garlic over the soup instead of sprinkling it. What if I had swallowed the screw? This is why we must always be careful," he said.

Anonymous said he managed to exchange his bottle of a fried garlic for a brand new one.

In response to a Stomp query, a spokesman for Jia Jia Wang Trading Pte Ltd, the company that manufactured the fried garlic, said: "We have received an email from the customer on Nov 5 and we have responded to him."

When asked about the company's response, the Stomper shared that the company had conducted checks at their production site and did not manage to find a match to the screws used on their automated fryer.

They were also unable to match the screw found in the fried garlic to the screws used for the equipment in their production premise, said Anonymous.

The company added in their response to the customer that it is possible the screw came from the raw materials that was purchased from their supplier.

According to Anonymous, the company said they have since reached out to the supplier about this matter.

Anonymous also said he was told by Jia Jia Wang Trading Pte Ltd that they will be stepping up on their quality control and their food safety procedures.

They also apologised and offered the customer a $50 FairPrice shopping voucher as a form of compensation, to which he declined, shared the Stomper.

"I decided not to take their offer because my point was to highlight the danger of having foreign objects like a screw in food items," Anonymous added.

Related Stories
SIA apologises to first-class Suites passenger who found screw in soup
Woman finds screw in burrito from Super Loco: No lapses of hygiene standards found, says restaurant
Man buys bread from 7-Eleven -- only to find out that it's 'mouldy' and expired
More About:
food safety
screw
screw in food