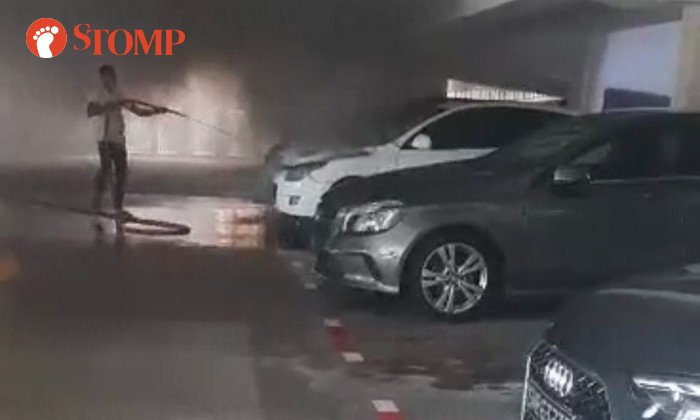 A man extinguished the flames from a car that caught fire at a multi-storey carpark at Block 447A Bukit Batok West Avenue 9 on Monday (Oct 25).

Stomper Uki, a resident in the area, was at home when he smelt something burning and decided to find out what happened.

Uki spotted a man extinguishing a fire at the multi-storey carpark and shared a photo and a video of what he saw to Stomp.

"I smelt something burning from my home and when I went to check what happened, I saw smoke coming out from the third level of the multi-storey carpark," Uki said.

"The car engine caught fire. I think it could have been overheated.

"The whole area was full of smoke."

In response to a Stomp query, a spokesman for the Singapore Civil Defence Force (SCDF) said they were alerted to the fire at 5pm.

"The fire involved the engine compartment of a car," added the SCDF spokesman.

"A member of the public extinguished the fire using a hosereel prior to SCDF's arrival."