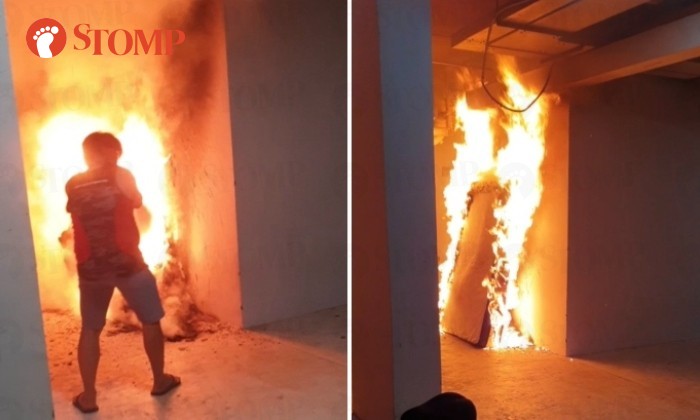 A fire involving a mattress broke out at the void deck of Block 208B Punggol Place on Wednesday (Sep 16).

A Stomper alerted Stomp to the incident and shared a video of what happened.

In the video, a man can be seen trying to put out the fire but is unable to extinguish it completely as the fire extinguisher became empty.

"Someone started a fire at the void deck of our block," the Stomper said.

"But before SCDF arrived, a brave man used a fire extinguisher found at a nearby childcare centre to put out some of the fire."

In response to a Stomp query, SCDF said they were alerted to the fire at about 7pm.

"The fire involved a mattress at the void deck. SCDF extinguished the fire using a fire extinguisher and one hose reel," said an SCDF spokesman.

"SCDF assessed a person for minor injuries and the person subsequently refused conveyance to the hospital."