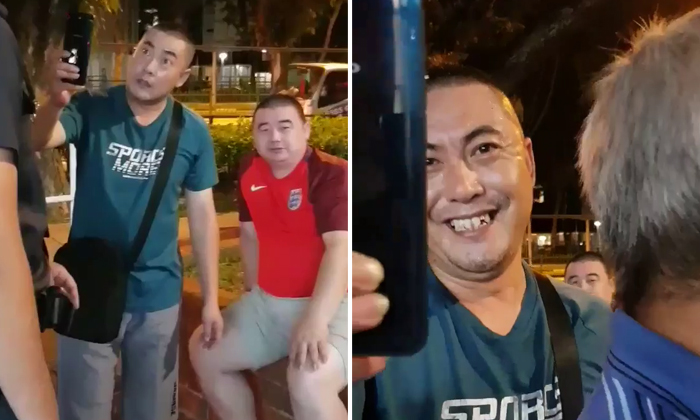 A 41-year-old man allegedly molested a beer lady at a coffee shop in Woodlands by using his left hand to slap her buttocks.

The police told Stomp in response to queries that they were alerted to a case of alleged outrage of modesty at Block 304 Woodlands Street 31 on May 18, at 9.49pm.

Chinese national Yu Zhiyong was charged on Thursday (May 23) with one count of using criminal force on the 30-year-old woman, intending to outrage her modesty, reported Lianhe Zaobao.

A video circulating on Facebook shows Yu, who was in a red shirt, sitting down while police officers responded to the scene.

Another man, believed to be Yu's friend, can be seen using his phone to take a video of the police.

Meanwhile, someone filming the entire incident can be heard telling Yu's friend: "I tell you ah, I am recording this. You are not respecting Singapore's laws, I will definitely upload this."

According to Zaobao, Yu's friend had also accompanied the accused to court.

Yu is currently out on a $5,000 bail and plans to apply for a lawyer under the Criminal Legal Aid Scheme. He will return to court on May 30.