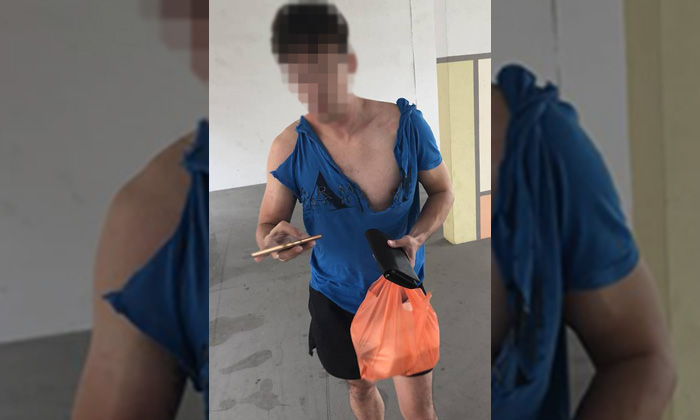 A man was arrested by the police for public nuisance after he allegedly took a video of a woman at the void deck of Block 155 Simei Road on Oct 17 at about 1.45pm.

The woman, who caught the man in the act, took a video of him as she confronted him and uploaded it on Facebook.

The video, which has gone viral, showed her confronting the man after she had struggled with him in an attempt to take his phone from him.

He had torn his shirt in the struggle.

"Why are you walking so close to me? You were filming me right?" said the woman in the video.

The man, however, denied his actions and faced away from the camera.

"Don't pretend!" she said. "You were so close to me I could feel you breathing down my neck!"

He continued denying her allegations and said: "I wasn't doing anything, trust me!"

She replied: "Why should I trust you? I don't even know you!"

According to her Facebook post, she first turned around when she felt something brush against her thigh.

As she turned to face the man, he was bent down behind her with his phone turned up.

She also caught a glimpse of herself on his phone.

The man then quickly started to walk away from her, but Chen demanded he showed her his phone, chased him, grabbed him and tried to get hold of the phone.

She said then caught another glimpse of a video on his phone. She believed the person in the video was her because she could see a "white shirt, black skirt and long hair".

At this point, she was chasing him trying to get the phone.

"At one point I got the phone but he twisted my left wrist and snatched it back," she said.

Throughout the scuffle, the man was fiddling with his phone, said the woman.

After about a minute of the struggle, the man then passed her his phone for her to check, but she believed that by then, he had already deleted the video.

She recorded the video as she confronted the man after the struggle.

She then called the police and took a photo of his Identification Card (IC) while waiting for them to arrive.

She added: "I hope that by sharing my experience, it will spur women to always take a stand for themselves.

"At the time this happened, I was wearing a long-sleeved shirt and a knee-length skirt, yet this incident could still happen.

"However, don't be scared and keep quiet about it."

She also said that the incident was very traumatising to her.

"If I, as an adult can be so scared by the experience, I cannot imagine teenagers or secondary school girls in the same position," she said.

"I feel so traumatised by the whole incident especially by the fact that I was so oblivious and it happened in daylight.

"The fact that a stranger has seen things he shouldn’t without my knowledge makes me feel like vomitting.

"I'm really worried that the videos get circulated on forums, as I suspect he still has them or even worse, if he had sent them to someone else.

"I really hope that he would be punished and get whatever help he needs so that he will not commit such a crime to any other female again."

In response to a Stomp media query, the police said: "On Oct 17, at 1.46pm, the police were alerted to a case of public nuisance at Block 155 Simei Road.

"A 29-year-old man was arrested in relation to the case.