Man attacked by otter after trailing pack of 30: 'My family said it served me right' 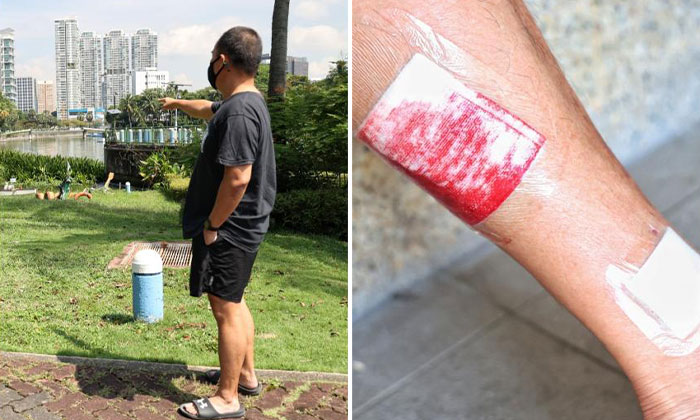 A man's morning run ended with a trip to the hospital for a tetanus shot after he was bitten by an otter at Kallang Riverside Park on Monday (April 4).

Excited to see a pack of about 30 otters - a much larger group than what he usually sees in the park - Mr Ang, who declined to give his full name, followed the pack to take videos while keeping a 2m distance.

But about 30 seconds later, an adult otter lunged at the 52-year-old and bit him on the calf.

"I was a little shocked when the otter turned to me, my instinct was to stay still and hope nothing would happen. I didn't think it would bite me."

Although his leg was bleeding, Mr Ang, who lives in the area, did not think it was a serious enough injury to call an ambulance.

The engineer said he spots otters on his jogs about once a week, but usually only in groups of five or six.

He washed the wound at a nearby toilet and then took a bus to go to Raffles Hospital in Bugis, where he got an X-ray and a tetanus shot.

The doctor also gave him five days of medical leave, although he said he feels fine.

"When I told my family what happened, they said it served me right," he said, laughing.

"I have advised them to not get close to wild animals in the past, but in my excitement I forgot to heed my own advice," he said, adding that the incident would not deter him from his daily jogs there.

"While it's wonderful to be able to see wild animals within our urban landscape, we need to know what to do and how to be around them."

He added that the public should always give wild animals space.

"The otters in Mr Ang's video have pups with them. This would make the adults more cautious and protective of their surroundings," he added.

"The person following the otters may have further triggered the family into thinking he is a potential threat, which is the likely reason for the otters turning defensive."

Mr Ang said that he hopes what happened to him serves as a reminder to the public.

"Everyone should remember to keep a safe distance from wild animals and just admire them from afar."

He added: "I hope nothing happens to the otters because it's really not their fault. I blame myself - I shouldn't have got so close."

In May last year, a 77-year-old man was bitten on the leg by an otter at the nearby Upper Boon Keng Road, near the Kallang River.

More recently, a man on a morning walk at the Singapore Botanic Gardens on Nov 30 last year was left with more than 20 wounds after being bitten by otters.

Mr Graham George Spencer had spotted about 20 otters crossing a dimly lit path in front of him when another man ran towards them.

The otters tried to bite the runner, but ended up attacking Mr Spencer instead.

Related Stories
'I actually thought I was going to die': Man who was attacked by otters at Botanic Gardens
Woman injured after being bitten by otter that 'charged' towards her at Gardens by the Bay
Wild boar knocks out woman, runs into glass door of shop in Yishun
More About:
otter
otters
animal attack
attack
Kallang