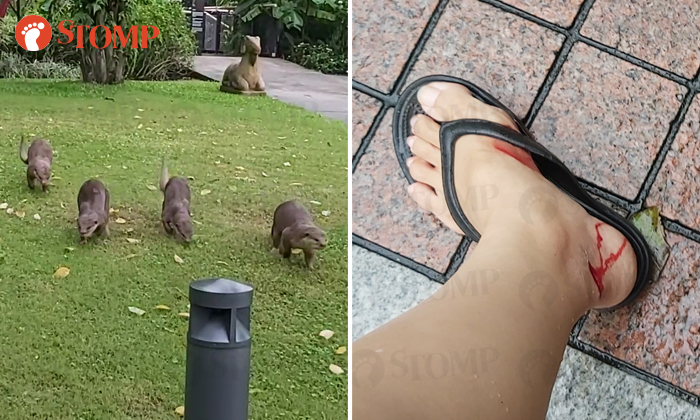 A sightseeing trip at Gardens by the Bay turned into a painful experience for a woman after she suffered injuries from an otter bite.

Stomper Anonymous had decided to visit the iconic attraction with her nine-year-old son using their SingapoRediscovers vouchers on Monday (Dec 7).

However, her outing was marred when a family of otters "charged towards" her and one of them bit her foot, she said.

Recounting the "terrifying experience" that occurred at around 5pm, Anonymous said: "After we had visited the Cloud Forest and Flower Dome, we decided to take a stroll in the garden.

"It was at a small patch of grass near the Indian Garden that we spotted a family of four otters roaming around.

"As this was my first encounter with otters, I excitedly took out my mobile phone and tried to take a video of them. We were more than three metres away from the animals.

"Never did I expect that the family of four began charging towards me. I was frozen in that instance and then felt a sharp pain on the lower left leg, near to the ball of my foot.

"When the otters were gone, I realised that my foot was bleeding profusely.

"There were two or three visitors at the scene but none came forward to help. I guess they were equally shocked.

"With the help of my son, I dragged my feet to the visitor's centre which was a dreadful 15-minute walk, only to realise that it was closed."

Anonymous said she eventually sought help from an employee stationed at the Flower Dome, adding: "The staff member was kind enough to want to help to apply first aid on my injuries.

"But to our dismay, she realised there were no disposable gloves in the first aid box. She had no choice but to leave me to sit around while she went searching for a pair of hand gloves."

According to Anonymous, she sustained a 2cm on one side of her ankle a 1cm wound on another side of the same ankle.

The Stomper shared: "I had to undergo three stitches for the 2cm wound at the doctor's and now have difficulty moving around.

"I hope my experience serves as a reminder to everyone to be very careful with wild animals.

"At this point, I would also like to appeal to Gardens by the Bay's management to ensure a complete and adequate supply of standard first aid items in their first aid box, as emergencies cannot be foreseen."

In response to a Stomp query, a spokesman for Gardens by the Bay confirmed that a visitor had approached a Gardens staff for assistance after being bitten by an otter.

"We apologise for the delay in administering first aid, and have since ensured that all first aid kits are adequately stocked," said the spokesman.

"For the safety of the public, we would like to take this opportunity to remind all visitors to observe wildlife from afar as animals may react out of natural instinct."

Going too close to otters may frighten them, according to a National Parks Board (NParks) advisory. Members of the public are advised not to touch, chase or corner them.

More dos and don'ts when encountering otters can be found on NParks' website.

Related Stories
Wild boar charges at woman and attacks her in 'matter of seconds' at Sungei Api Api Park
SPCA strongly advises cat owners to sterilise their pets after boy gets attacked by family cat
Retiree stung to death by hornets while hunting for fruits in Hillview forest
More About:
otter
otters
animals
animal attack
injured