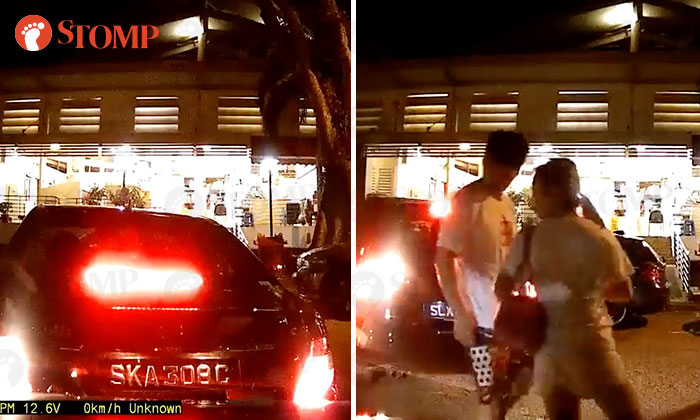 Stomper Justin is looking for a couple who reportedly reversed their Mercedes into his car while attempting to park in a lot next to his in a Lorong Mambong carpark at Holland Village on Monday night (May 21).

Justin told Stomp that he had parked his car in the lot at about 8.30pm.

At about 10.20pm, the driver of a black Mercedes SKA308C is caught on video attempting to move into a lot next to Justin’s car.

The Mercedes driver makes several turns as the road was apparently too narrow with another car parked in front of the lot.

During the process, the Mercedes reverses and hits Justin’s car, before finally moving into the lot.

Moments later, a man in a white T-shirt is seen walking in front of Justin’s car.

Lowering his head, the man inspects Justin’s car, as he paces back and forth.

He is then joined by a woman holding a car key.

The two turn and take a look before walking away.

“When I returned to my car at 11.30pm, I found that some parts had been dislodged.

“My dashboard camera informed me of an impact earlier and I looked through the footage.

“The two of them did not leave behind their contact details after hitting my car.

“We all need a dashboard camera these days to nail this kind of people."

Asked how he had arrived at the conclusion that the two were responsible for the accident, Justin said:

“No one would stop to check my vehicle unless they know about the damage.

“Furthermore, the woman was holding a car key, and I suspect that she was the one driving the car.”

"The police confirmed that a report was lodged and investigations are ongoing."