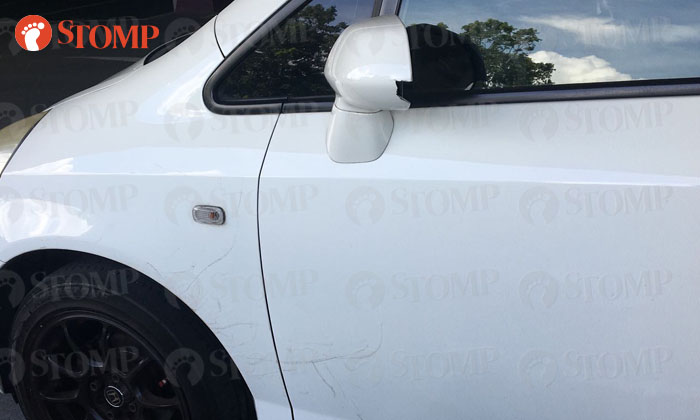 Stomper Anonymous was driving along the Pan-Island Expressway (PIE) towards Changi Airport yesterday (May 15) at around 10.15am, when his car got hit by a motorcyclist.

Anonymous said: "I am requesting for witnesses regarding a hit-and-run incident which occurred yesterday morning."

"I was driving along Toa Payoh at the right most lane at 70km per hour when a reckless motorcyclist hit my car from the left and sped off.

"As my side mirror was hit, I could not chase the bike."

Anonymous said that this incident was witnessed by a "kind lady" who tried to get him to follow her car to get the footage of the accident by overtaking and waving at him.

However, Anonymous said that there were too many cars and with a dented side mirror, he never got to see her car plate number. Hence, he was not able to "follow her closely and missed her exit at Kallang".

"I would like to seek Stomp's help in finding this reckless motorcyclist."

Related Stories
Driver knocks rider off his bike while changing lanes on SLE
Stomper appealing for video after wife's car gets side-swiped by hit-and-run van
Driver of Mercedes-Benz SKJ1644C reverses into parked car -- then leaves
More About:
reckless
hit-and-run
appeal