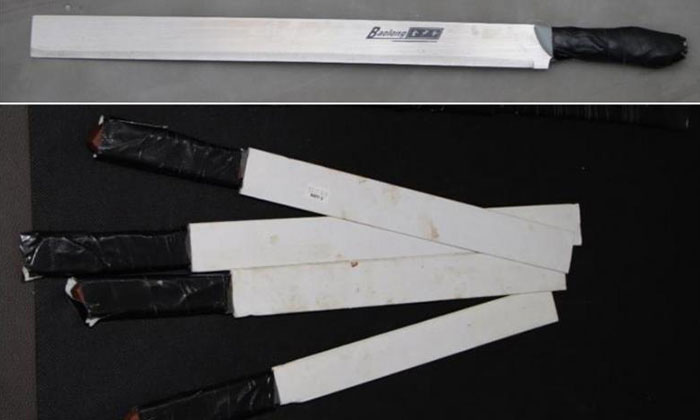 In a third violent incident involving a blade on Monday (March 14), a man allegedly threw a knife at the police when they confronted him at Bukit Batok.

The police said that the 27-year-old will be charged on Wednesday (March 16) for voluntarily causing hurt to deter a public servant from his duty and for possession of an offensive weapon.

In a press statement on Tuesday (March 15), the police said they received a call at about 9.10pm on Monday evening requesting assistance.

The man was allegedly armed with a knife, and was shouting and looking for someone at Bukit Batok West Avenue 8.

When officers responded, the man pulled out a knife from under his T-shirt and threw it at an officer, police said.

The man was then arrested and the knife seized, along with five other knives after the police later raided his home.

Photos of the knives that were seized showed the handles of the blades wrapped in black tape.

The police said preliminary investigations do not suggest the incident to be an act of terror.

"The police have zero tolerance towards such acts of violence against public servants who are carrying out their duties and will not hesitate to take action against those who blatantly disregard the law," they said.

Those convicted of voluntarily causing hurt to deter a public servant from his duty may be jailed for up to seven years and fined and caned.

Those convicted of possession of an offensive weapon in public may be jailed for up to three years and caned.

This was the third reported violent incident involving a bladed weapon that happened on Monday.

At about 1.55pm that day, a 37-year-old man was caught on video swinging a sword while hitting cars near Buangkok Square Mall.

He was also seen swinging the sword and attacking a pedestrian, before he was pinned down by members of the public and arrested.

At about 6.20pm that day, a 33-year-old man had allegedly attacked some passers-by at Strathmore Avenue using a razor blade.

He was arrested after he had injured two people.

All three men are expected to be charged on Wednesday.