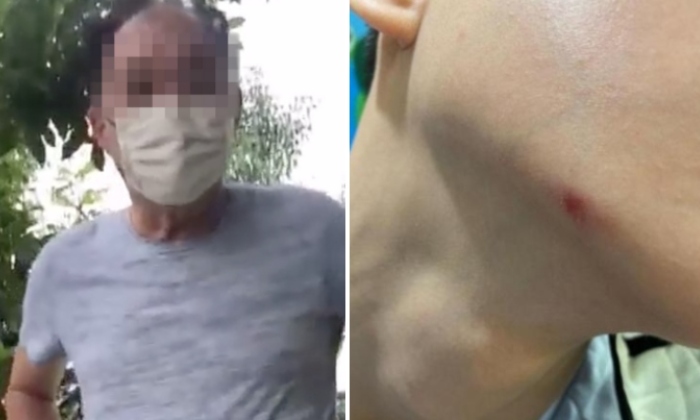 A casual ride around his Hougang neighbourhood last Friday left a primary school boy shaking in fear after a man stopped him from cycling on a footpath and then assaulted him.

The boy's father, Mr Stanley Tan, 41, yesterday alleged that Caden, 12, was slapped on the face, hit on the head and kicked on the chest by the man who looked to be in his late 50s.

This serve as an education to all in case your don't know the right of way. Let's not be barbarian. As a grown up man, u...

The police said they were alerted to a case of voluntarily causing hurt at 6.45pm on Friday and are investigating.

Caden was taken to KK Women's and Children's Hospital and discharged later that night.

He had a wound on his chin, a swollen cheekbone and swelling on the back of his head, Mr Tan told The New Paper.

The bank executive had bought Caden a bicycle as a gift two weeks ago after his Primary School Leaving Examination and allowed him to cycle only around the perimeter of their block in Hougang Avenue 8.

"I always tell him to give way to others and not to cycle fast."

On Nov 13, his son came home and said a man had stopped him and told him he could not cycle on the footpath.

"I told Caden to try to reason things out if he had a similar encounter again... I even downloaded the Land Transport Authority's regulations for him," said Mr Tan.

A week later, Caden met the man again while cycling on a footpath near Block 438 Hougang Avenue 8.

In Caden's video recording, which Mr Tan later posted on Facebook, the boy can be heard trying to explain in a jittery voice that bicycles are allowed on footpaths.

The man, who can be seen grabbing the handlebars of the bicycle, tells him: "Turn back. I don't want to see you here."

When Caden asks who said he could not cycle on the path, the man says: "I said it. The Government said it... Don't argue with me."

When he realises he is being filmed, he seems to knock the phone out of Caden's hand before allegedly assaulting him.

Mr Tan said Caden called him at about 6.30pm and he rushed to the scene, where he saw his son pushing his bicycle accompanied by a man in his 40s.

"I initially thought he was the one who beat up my son. But he was an eyewitness who checked on my son and asked him to call me," said Mr Tan.

When shown pictures of the alleged assailant, Mr Tan recognised him as he had walked past moments earlier. He pursued the man and called the police.

He said the man challenged him to a fight but apologised and tried to play down the incident after he realised there was a witness. Mr Tan added: "My son was quite shaken, his whole body was shivering (in fear)."

Days later, Caden is still traumatised and afraid to go cycling on his own, Mr Tan said.

He said he posted about the incident on Facebook as he wanted justice for his son.

"I blamed myself for not being able to stand up for him... I didn't know the whole thing would go viral."

He is now leaving the matter to the police. "I told Caden it is a lesson for him to learn as well. Down the road, he might meet more unreasonable people so he needs to be street-smart."

Dos and don'ts of cycling on public paths

Under the Active Mobility Act (AMA), cyclists are allowed on all public paths except for pedestrian-only ones.