Family allegedly abused friend, knocked out her teeth and forced her to eat food soiled with urine 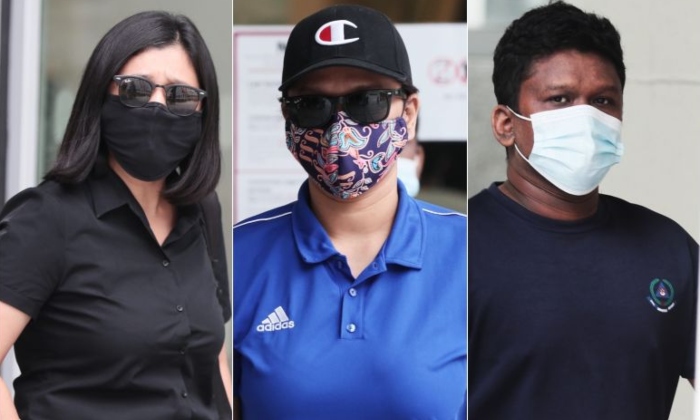 Several members of a family are accused of physically abusing a female friend who has mild intellectual disability.

Pliers were used to twist the victim's toes and a hammer to knock out her teeth. A baseball bat was used to hit her head and she was splashed with boiling water.

The repeated acts of abuse caused the victim to develop visual disability.

A district court heard that during a Hari Raya Haji celebration in September 2017, one of her alleged tormentors, Haslinda Ismail, 34, urinated into a packet of hor fun and forced the victim to eat the soiled food.

The famished woman complied. She was finally taken to hospital in a "near-death state" in January 2018.

Haslinda's Egyptian husband, Hany Aboubakr Abdelkarim Abdelfattah, 33, pleaded guilty on Tuesday (Nov 3) to one count of assaulting the victim and was sentenced to three weeks' jail.

The cases involving his wife and her family members are still pending.

The victim later got to know the family through Mr Isafi and his then girlfriend.

Over time, the victim grew close to the family and often visited their home at Block 714 Woodlands Drive 70.

The victim, who worked at a fast-food restaurant, ran away from home in early 2016 and moved into the family's flat, where she stayed rent-free.

But she had to buy her own food, give Hasmah $150 month for laundry and sleep on a mat in the living room.

Hany, who was employed as a sales assistant at a supermarket near the restaurant where the victim worked, befriended her and they became close.

Some time between May and June 2016, she performed sexual acts on him.

Haslinda later found out about them and confronted the victim in the flat. She allegedly slapped the woman before asking her husband to do likewise.

The DPP said: "After this confrontation, members of Haslinda's family... engaged in various acts of abuse against (the victim). This included assaults with deadly weapons, such as pliers to twist (her) toes, a hammer to knock out her teeth, a baseball bat to hit her head and splashing boiling water on her."

Haslinda and Hany later moved to a unit at Block 785A Woodlands Rise. On Aug 31, 2017, Haslinda took the victim to her home to help with the family's Hari Raya Haji preparations.

They reached her home at around 10pm. The court heard that Haslinda then made the victim stand in the kitchen. The DPPs said that she also made sure that the victim did not use the toilet or sleep that night.

Unable to control herself any longer, the victim soiled herself at around 11am the next day.

The prosecutors added that Haslinda then flew into a rage and hit the victim with a broomstick until it broke.

They also said that she used a hanger and a rolled-up wet towel to hit the victim. Haslinda also used cable ties to secure the victim's hands and legs.

The victim was then made to stand in her kitchen in her soiled trousers until the family arrived for Hari Raya celebrations at around 3pm. They did nothing when they saw her.

Hasmah had brought two packets of hor fun for the victim, the court heard. The DPPs said that Haslinda then threw one of them away and urinated into the other.

The court heard that Haslinda forced the victim to eat the tainted food and the woman complied as she was very hungry.

Court documents did not state how the family's offences came to light but the victim was later rushed to hospital on Jan 16, 2018.

Details about her current physical state and where she is now were also not disclosed.

Haslinda, Hasniza, Iskandar and Iski are expected to plead guilty on Nov 25. Their mother's pre-trial conference will be held on Nov 30.

For assaulting the victim, Hany could have been jailed for up to two years and fined up to $5,000.