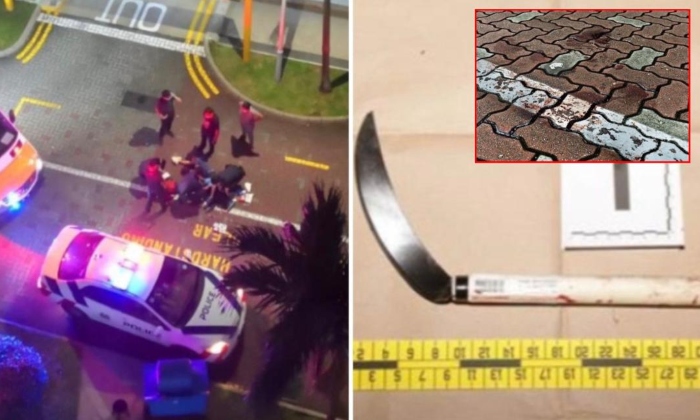 Unhappy that his friend was issued a fine for a smoking offence, a 30-year-old man allegedly punched and slashed two Certis officers with a sickle on Monday (Nov 9).

The police said in a statement on Tuesday (Nov 10) that the enforcement officers, attached to the National Environment Agency (NEA), were allegedly assaulted by a man while performing their enforcement duties at Block 503C Canberra Link.

The man then fled the scene, but was arrested within seven hours.

Witnesses told Chinese-language newspaper Lianhe Zaobao that the two Certis officers were seen speaking to each other when a bearded man appeared with a sickle and attacked them.

Another witness named Mr Peng, who resides in the area, said that the attack occurred near the carpark at the foot of the Housing and Development Board (HDB) block.

Mr Peng added that the ground was stained with blood and that the police cordoned off the area when they arrived at the scene.

A Canberra Link resident, known as Mr Liang, also told Zaobao that he had just returned home when he heard 'piercing shouts' from downstairs.

He then saw one of the Certis officers fall to the ground in the middle of the road while pressing his thigh.

Two passers-by and a taxi driver who was nearby also stopped to help the officer.

Mr Liang added that police officers soon arrived at the scene and helped to bandage the wound.

A bloodstained sickle, believed to be the weapon used by the man to assault the officer, was also found near the scene of the alleged assault.

Police investigations are ongoing and the man will be charged in court on Wednesday (Nov 11) with voluntarily causing hurt by dangerous weapon.

If convicted, the man is liable for a fine, a jail term not exceeding seven years, caning or any combination of such punishments. 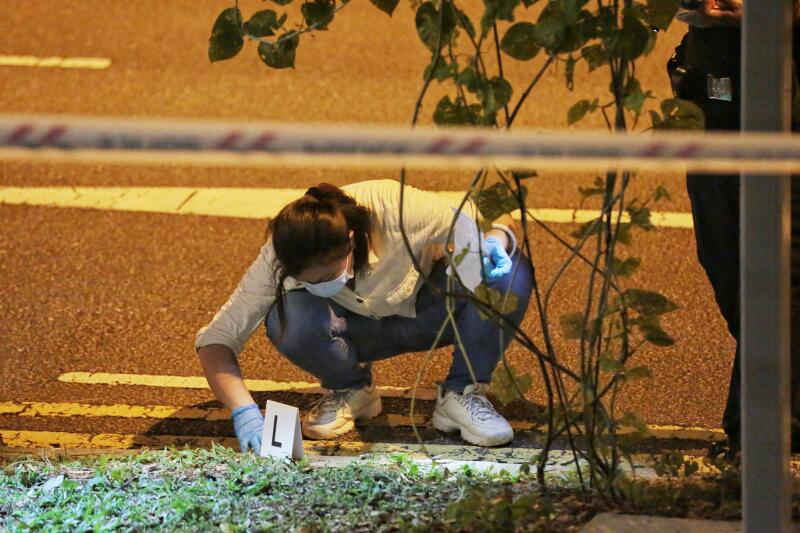 A joint statement released by Certis and NEA said: "We are deeply concerned to learn of the incident that happened on Monday (Nov 9).

"The attack took place shortly after the completion of a smoking enforcement action by the officers at a Housing and Development Board (HDB) void deck.

"One of the officers was punched, while the other was attacked with a sickle. The attacker was a third party who was present, but not implicated in the smoking enforcement action that had taken place earlier.

"The officers were on duty to ensure the well-being of the residents by enforcing against public health offences, such as littering and smoking. This unprovoked act of violence against frontline officers who are discharging their duties and upholding the law is unacceptable."

Certis and NEA added that one of the officers is currently recovering in hospital and in stable condition and the other officer has received outpatient treatment.

"The safety and well-being of our officers is our top priority and our immediate concern is to support the affected officers in their recovery," added the spokesman.

"Management from Certis and NEA have also visited the hospitalised officer to give him support.

"Certis and NEA have zero tolerance for any act of violence against our officers who work tirelessly to keep our environment clean and safe for the community.

"We will stand by our officers and render our full assistance to the police in their investigation."