Man, 82, hit cleaning lady's arm after she tried to stop him from ripping plastic off seats at Chinatown food centre 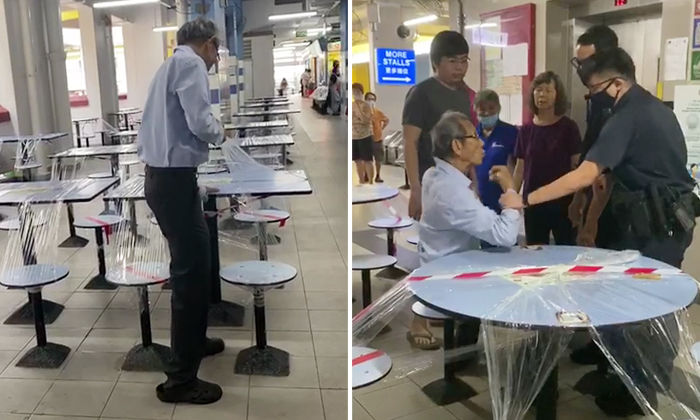 Police are investigating an elderly man who ripped off plastic sheets covering the seats at a hawker centre in Chinatown and hit the arm of a cleaning supervisor who tried to stop him.

A video circulating online shows the 82-year-old man tearing off plastic sheets from a table and chairs despite shouts calling out to him.

In another video, a police officer can be heard repeatedly telling the elderly man to calm down.

"Calm down and I will let go of your hand," says the police officer.

A woman wearing a blue shirt, believed to be the cleaning supervisor, is also seen telling the police what happened. She can heard saying, "He scolded me."

The man then stands up and raises his arm, causing the cleaning supervisor to say, "You want to fight is it?"

Responding to queries by Stomp, the police said they responded to a call for assistance for a case of dispute between an 82-year-old man and a female cleaning supervisor at Block 335 Smith Street at 5.25pm.

A police spokesman told Stomp: "The elderly man was removing the plastic sheets covering the seats that were cordoned off as part of elevated safe distancing measures, and the cleaning supervisor was trying to get him to stop.

The man was returned to the care of his family members after the police contacted them.

The police are investigating the case of voluntarily causing hurt and mischief.

They will also look into possible breaches of the COVID-19 elevated safe distancing measures by the elderly man.

In their statement, the police also said: "Members of the public are advised to take the circuit breaker measures seriously. This includes taking care of elderly family members and encouraging them to stay home.

"Everyone must play their part for the circuit breaker to be effective."

Related Stories
Woman fined $300 after refusing to stop eating at Changi Airport food court, says "I don't like S'pore"
Man who told police 'don't touch me' arrested for not returning to welfare home, warned about safe distancing measures
Auntie accuses enforcement officer of bullying and forcing her to wear mask: 'It's my problem if I die'
More About:
Covid-19
dispute
fight