Man who told police 'don't touch me' arrested for not returning to welfare home, warned about safe distancing measures 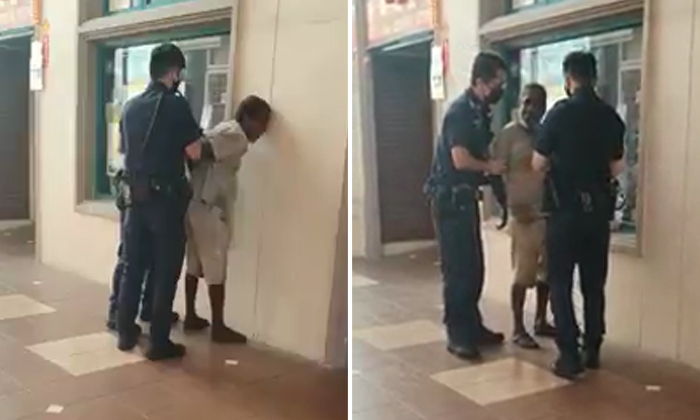 The police have clarified that a 63-year-old man was arrested in Woodlands last Friday (Apr 10) for his failure to return to his welfare home, and not for flouting circuit breaker measures.

He was issued with a written stern warning for failure to comply with elevated safe distancing measures, however, said police in a statement on Tuesday (Apr 14).

In the video, the man can be heard repeatedly telling police officers "don't touch me" and saying "I never disturb anybody" before being arrested.

The police said they had received a request for assistance at Block 768 Woodlands Avenue 6 at around 9am on Friday.

When the police arrived at the scene, they found the man sitting on a bench that had already been cordoned off.

"Despite repeated advice by the safe distancing ambassadors and police officers, he refused to leave the cordoned area," said the police.

The police also established that the man had failed to return to a welfare home, where he was supposed to be staying.

"He was thus arrested for failure to return to a welfare home under the Destitute Persons Act, and subsequently sent to the welfare home on the same day," added the police.

"The man was also issued with a written stern warning for failure to comply with elevated safe distancing measures."

Members of the public are advised to comply with the instructions of safe distancing ambassadors and police officers, who are doing their duty to keep the public safe.

Related Stories
Man arrested for disorderly behaviour and shop theft at Toa Payoh pharmacy, not for flouting circuit breaker measures
Elderly man who wanted to eat at void deck arrested after refusing to go home, shouting at police
Man arrested for public nuisance after stripping down to underwear in Kallang Bahru
More About:
arrest
police
Covid-19