Auntie accuses enforcement officer of bullying and forcing her to wear mask: 'It's my problem if I die' 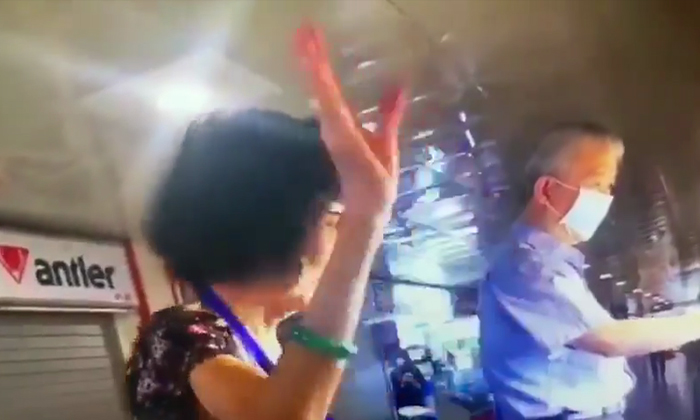 A woman was caught on camera having a dispute with an enforcement officer after she refused to wear a mask at People's Park Centre.

The incident occurred on Sunday (April 12), at around 12pm.

A video of the incident was captured by a passer-by and posted on Facebook, where it has garnered over 1,500 shares and been viewed more than 24,000 times.

In the video, the auntie can be heard telling the enforcement officer that she is an "adult" who has been "doing business here for 20, 30 years".

She also says: "You don't anger me. I have asthma. You cannot force me."

Another man then tells the auntie that she should be staying at home, only for her to reply: "It's my problem if I die."

When the enforcement officer says that everybody is wearing a mask, the auntie responded: "Yes, but I don't like. I don't want."

She then says once more that she has asthma and that she will stay at home from "tomorrow onwards", but "you don't force me".

At one point, the enforcement officer says that "the whole of Singapore" is wearing a mask.

However, the auntie replies: "Don't compare. I am an old lady. Don't bully me."

Even though the enforcement officer repeatedly denied bullying her, she continues ranting and says: "Small kid bullying adult, bullying old people, you bully me."

According to Lianhe Wanbao, the entire scene lasted around 15 minutes.

On Tuesday (Apr 14), the government announced that it is mandatory for everyone to wear a mask when they step out as part of stricter measures to curb the further spread of Covid-19.

Those who do not risk a $300 fine for first-time offenders.

There are exemptions for those engaging in strenuous exercise and children below the age of two, as medical experts recommend against them wearing masks, reported The Straits Times.

People may remove their masks when engaging in exercise such as running or jogging, but they must put them on afterwards.