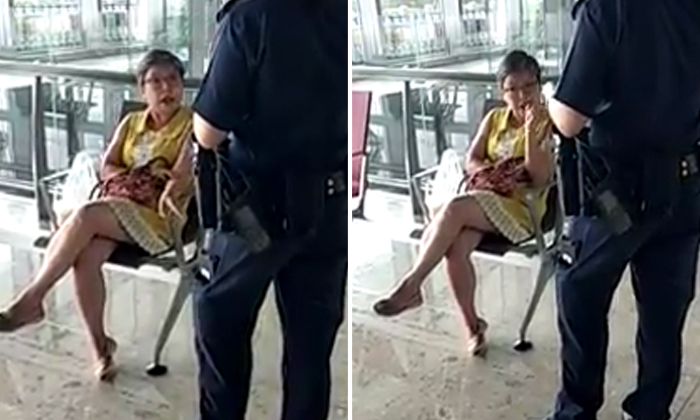 A 53-year-old woman was fined $300 for breaching safe distancing rules after she refused to stop eating in a food court at Changi Airport on Monday afternoon (Apr 13).

In response to a Stomp query, the police said they received a call for assistance from a staff member of a food court located at the airport's Terminal 4 (T4) at 1.41pm.

When police arrived at the scene, they established that the woman had continued to consume her food at a table inside the food court, despite being advised repeatedly by food court staff that she was not allowed to do so under elevated safe distancing measures.

The woman left the food court before the police arrived, but they subsequently located her at T4's Arrival Hall and issued her with a composition fine of $300 for breaching safe distancing rules under the COVID-19 (Temporary Measures) Act 2020.

"She was advised to adhere to the measures and she left the terminal thereafter," a police spokesman told Stomp.

A video of the incident was posted on Facebook, where it has been viewed more than 266,000 times and shared over 10,000 times.

In the one-minute video, the woman can be heard telling a police officer: "I don't like Singapore. I need to leave Singapore."

She also said: "Are you supposed to detain me? Don't let me to leave Singapore?"

Related Stories
Couple seen kissing at Upper Boon Keng Rd fined $300 each for breaching safe distancing measures
Man who told police 'don't touch me' arrested for not returning to welfare home, warned about safe distancing measures
Auntie accuses enforcement officer of bullying and forcing her to wear mask: 'It's my problem if I die'
Elderly man who wanted to eat at void deck arrested after refusing to go home, shouting at police
More About:
Covid-19
dispute