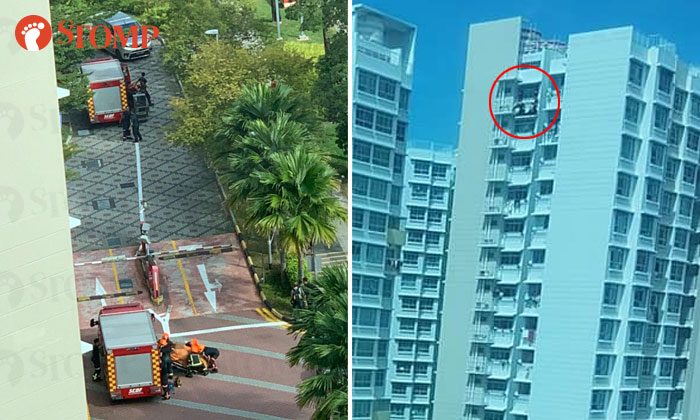 A 48-year-old man was arrested for drug-related offences at Block 623B Punggol Central on Sunday afternoon (Mar 1).

A Stomper alerted Stomp to the incident and shared photos she took of Police Tactical Unit (PTU) and Singapore Civil Defence Force (SCDF) vehicles from her home nearby.

"People kept taking photos and looking up," she said.

Facebook user Liv Leong posted a photo of the scene and shared that two SCDF officers were seen crouching outside a top floor unit of Block 623B.

The SCDF told Stomp it received a call for assistance at 2.30pm.

"SCDF set up two safety life air bags on the ground floor and deployed a team of DART rappellers as precautionary measures," the spokesman said.

"There were no casualties reported."

In response to a Stomp query, the police said they received a call for assistance at 1.03pm and subsequently arrested the man for suspected drug-related offences.

Investigations by the Central Narcotics Bureau (CNB) are ongoing.

Related Stories
Half-naked man found dead at foot of Punggol block after being confined in room by another man
40 men aged between 16 and 77 arrested during enforcement operation in Geylang
2 arrested for suspected consumption of drugs, using criminal force on public servant at Jalan Bukit Merah
More About:
arrested
drugs
punggol