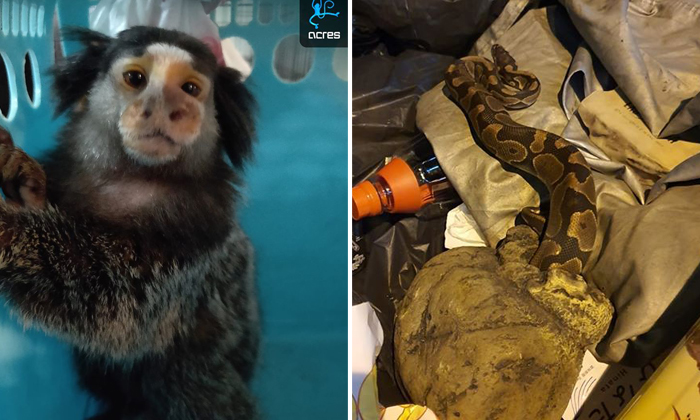 The Animal Concerns Research and Education Society (Acres) is appealing for information regarding two cases of illegal pet abandonment that its wildlife rescue team responded to in a week.

The first case involves a male marmoset, which Acres was alerted to on May 27, at around 3pm.

The primate, which was found on a tree along 701 Geylang Road, was rescued and sent to the Wildlife Reserves Singapore for further examination.

"He was found to be in poor condition," said Acres in a Facebook post on Tuesday (June 9).

"The animal was very thin, and had signs of moderate to severe dental and gum disease, as well as tumours.

"The difficult decision was therefore made to euthanise on humane and welfare grounds."

In the second incident that occurred at around 9pm on June 1, Acres attended to a case of a ball python found at the bin centre of Block 52 Chin Swee Road.

A cleaner, who discovered the live reptile, said that it was "tied up in a white plastic bag and discarded at the lift lobby of the said block".

The python is now under the care of Acres.

Acres said in its post: "We have reported both cases to the National Parks Board (NParks) to investigate further.

"We will greatly appreciate any information which will help us to continue the fight against the illegal wildlife trade. It is heartbreaking to witness such rescues.

"The suffering doesn’t end at the capture, sub-optimal conditions of breeding or smuggling, but illegal keeping of wildlife often culminates in such abandonment.

"If they have not been spotted by kind people, they would have suffered even more."

Related Stories
Man who dropped pet dogs into canal says he brought them for a swim: NParks investigating
AVS looking into case of cat that was allegedly beaten to death and hanged from pipe at Bedok Reservoir
Tail of community cat in Ang Mo Kio allegedly cut off, SPCA investigating
More About:
animal cruelty
acres
animals
rescue
python
appeal