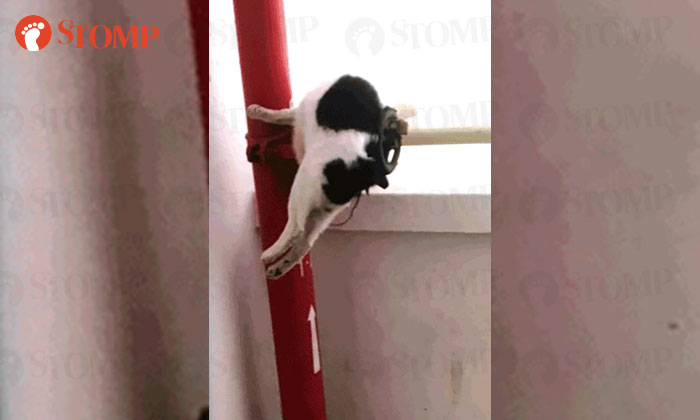 The Animal and Veterinary Service (AVS) is looking into an alleged case of animal cruelty involving a cat that was believed to have been beaten to death and found hanging from a pipe at Bedok Reservoir.

Stomper Koh said: "Our neighourhood cat 'Ah Gu', who was always gentle and friendly, was brutally lynched and beaten to death at around 1am.

"His body was strung up on a pipe for all residents to see."

She told Stomp that the cat was found on the second floor of the block and that the neighbourhood's cat lovers reported the incident to the police and AVS, a cluster of the National Parks Board.

"We demand full justice for this innocent cat and I hope the authorities will spend full efforts in catching this sadistic and cruel perpetrator," the Stomper said.

"There are many more neighbourhood cats here and I fear for the residents and animals' safety."

In response to a Stomp query, Ms Jessica Kwok, group director of AVS, said they take all feedback received from the public on animal cruelty seriously and will look into the cases reported.

"We were concerned when alerted to the alleged case of animal cruelty at block 710 Bedok Reservoir Road, and are looking into the case," she said.

SPCA's executive director Dr Jaipal Singh Gill told Stomp that they were aware of the case as well.

"It was heartbreaking to hear of the death of this beloved community cat and a thorough investigation needs to be carried out to ascertain the cause of death," he said.

"We understand the authorities are investigating.

"Animal cruelty has no place in our society.

First-time offenders caught abusing an animal may be charged under the Animals and Birds Act, and could be fined up to $15,000, jailed up to 18 months, or both.

Members of the public can play a part by promptly reporting suspected cases of animal cruelty to AVS via their website or call their Animal Response Centre at 1800-476-1600.

As with all investigations, all forms of evidence are critical to the process, and photographic and/or video-graphic evidence provided by the public will help. Information shared with AVS will be kept strictly confidential.