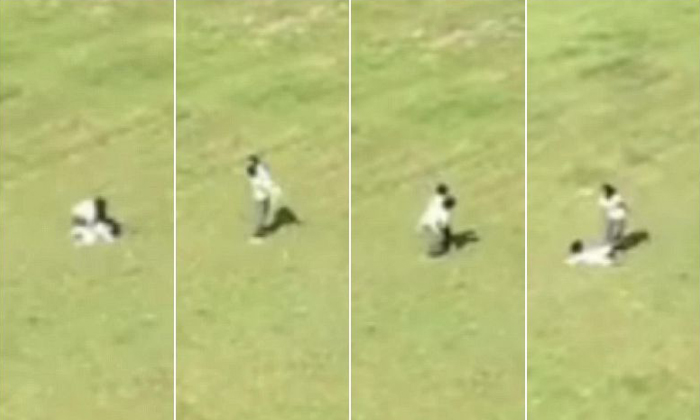 A maid smacked her employer's five-year-old son in a field in Punggol and deliberately threw him onto the ground twice when he struggled as she tried to carry him.

An eyewitness recorded a video of the incident with her mobile phone and posted the clip on a WeChat group earlier this year.

The 24-year-old Indonesian maid was sentenced on Tuesday (Aug 20) to eight months' jail after pleading guilty to one count of ill-treating the boy.

She cannot be named as a gag order has been imposed to protect the child's identity.

DPP Ang told District Judge Ng Peng Hong that the maid started working for the boy's family in November last year and besides household chores, she was also required to look after him. At around 9am on March 12, he took a ball, left his home and went towards the field in front of Block 673C Edgefield Plains.

The maid went after him and picked him up, the court heard.

After that, the maid carried the boy and took him home.

Later that day, he told his 34-year-old mother about the incident and complained about pain on his chest.

The maid denied ill-treating him and claimed that the boy had rolled on the ground on his own. As a result, the mother did not pursue the matter.

But two days later, she came across the video on Facebook and learnt the truth.

She made a police report and took her son to hospital where he was found with mild tenderness over his spine.

For ill-treating the boy, the maid could have been jailed for up to four years and fined up to $4,000.

Related Stories
Man who kicked autistic boy in the stomach for 'playing roughly' near his son gets jailed 1 week
Man shouldn't be slapping girl while she kneels in public, says Stomper
Police investigating case of man repeatedly pulling child from car and throwing him to the ground
More About:
maid
abuse
child
child abuse
court