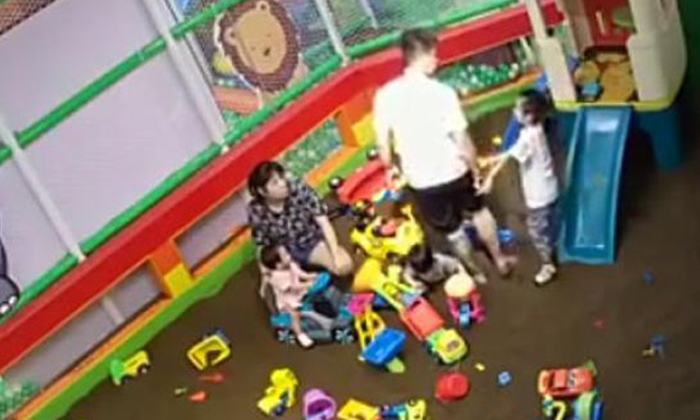 A father of two lashed out at a five-year-old autistic boy after seeing him "playing roughly" near his children in a sandpit.

Soo Wen Jie kicked the child in the stomach after the boy tried to take a plastic shovel from the man, then swung his arm at him, knocking the boy onto a slide. The incident was caught on camera and went viral on social media.

The boy, who attends a school for children with special needs, had to see a psychologist after the incident.

Soo, 29, was sentenced to a week in jail yesterday after pleading guilty to an assault charge.

He was visiting Sunshine Childhood Playland in Yishun Avenue 2 with his wife and their two young children on April 9 last year when he noticed the boy "playing roughly" near his son, said Deputy Public Prosecutor Chee Ee Ling.

Soo was standing between them when the autistic boy - who cannot be named due to a gag order to protect his identity - tried to take the shovel from him.

Soo kicked the boy, who became "frustrated". Soo then shoved the boy away when he tried to hug him, before hitting the child's upper body, knocking him onto the slide.

The boy's 45-year-old mother, who was nearby, heard the commotion and took her son to another play area.

Later that evening, the boy complained of pain, and his mother contacted the firm running the playground, which had closed-circuit television footage of the incident.

The next day, the boy was taken to Yishun Polyclinic, where he was found with tenderness over his upper abdomen and breastbone.

DPP Chee urged the judge to sentence Soo to a week in jail, stressing that he had assaulted a "very vulnerable victim".

Defence lawyer Walter Silvester pleaded for his client to be given either a fine or a day in jail, saying that Soo had "over-reacted" and was not aware that the boy has autism.

The lawyer also said that Soo had offered to pay compensation, but was rejected.

The boy's mother was in court yesterday, but she declined to comment to The Straits Times.

For assaulting the child, Soo could have been jailed for up to two years and fined up to $5,000.