Man shouldn't be slapping girl while she kneels in public, says Stomper 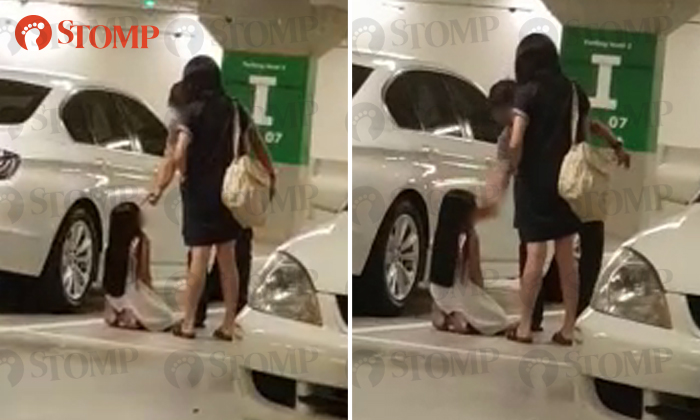 The police and the Ministry of Social and Family Development (MSF) are investigating the incident.

A man was caught on camera slapping a young girl while she knelt on the ground at the carpark of IKEA Tampines on Monday night (Nov 5).

Stomper Anonymous felt concerned after witnessing the incident at around 9pm and filmed a video, which he then sent to Stomp.

He described what he saw: "The man was seen shouting and slapping a girl, believed to be his daughter, and asking her to kneel down.

"I do not know what the man was upset about, but he was saying things like, 'I love you, but you cannot say these kind of things to me' and 'It's no longer your mum's place, it is my place'."

"I'm not sure if the woman in the video is the mother, but she seemed too scared to hold him off or do anything," said the Stomper.

"I stopped recording the video after I suspected that the man had noticed me.

"There were other onlookers but not many of them. Most were just passing to reach their vehicles.

"The man walked away after noticing that more people had started to gather.

"He shouldn't embarrass his daughter in public places like this and scare other families with young children. His voice could be heard from the escalator towards the carpark."

What do you think of the incident? Share your thoughts in the comments below.

Related Stories
Police investigating case of man repeatedly pulling child from car and throwing him to the ground
Father of boy attacked at Yishun playground: Autistic son hugged man as he wanted to play together
Video of woman forcefully covering child's mouth and pushing his head on MRT train sparks debate among netizens
More About:
child abuse
inappropriate