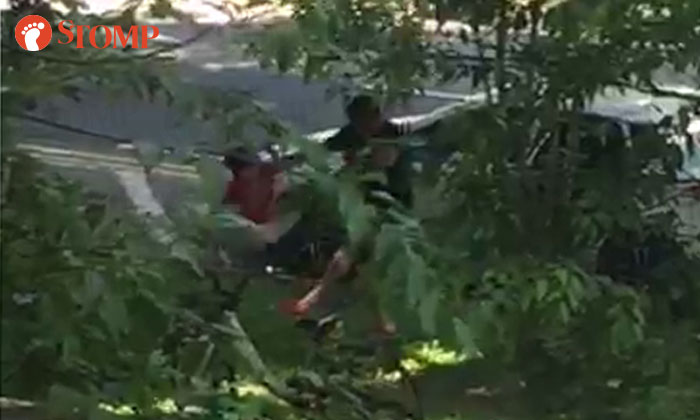 A man was seen repeatedly throwing and pushing a child to the ground at Sengkang East Way on Monday (Jun 4) at about 12.30pm.

Stomper Adriel alerted Stomp to the video that was posted in his estate's Facebook group.

In the video, a man appears to be berating a boy next to a white car that is parked on the side of the road before returning to the driver's seat.

When the boy opens the rear passenger door to get in, the man walks around again and pulls the boy out of the car before throwing him to the ground.

The boy gets up quickly and runs towards the car to get in again.

The man then comes around once more to pull the boy from the car and throw him to the ground before the boy comes back to the car and is shoved by the man yet again.

The video ends with the man apparently scolding the boy.

From the post that was shared by Adriel, a resident said that the man in the video drives a white BMW but the licence plate was not captured.

"No matter how [naughty] your child is, is that the way you punish your child by throwing him out of the car and [leaving] him behind?"

Stomp understands that the woman who shot the video called the police after witnessing the incident.

In response to a Stomp media query, a police spokesman said that the police were alerted to a case of ill-treatment of a child along Sengkang East Way on Jun 4 at 12.40pm.

Related Stories
Police investigating after man seen kicking and pushing boy at Yishun playground
Mum lodges police report after son was allegedly hit on buttocks by childcare centre principal as punishment
4-year-old in China suffers concussion after getting tripped by pregnant woman for being 'annoying'
More About:
child abuse
push