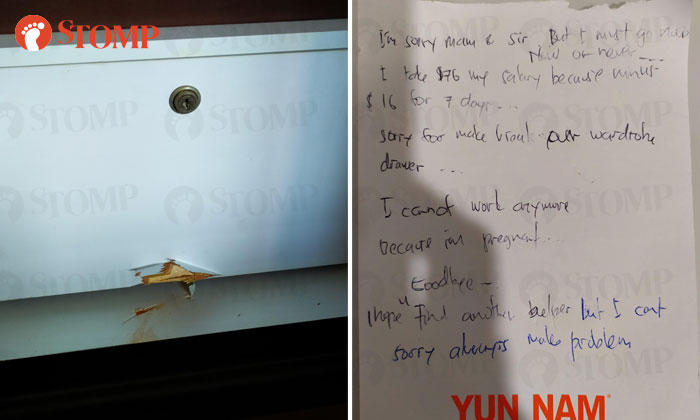 The police are investigating an incident where a maid allegedly broke her employers' locked wardrobe drawers and left their Bukit Purmei flat with $76 and her passport on Sep 26.

The maid's employer alerted Stomp to the incident and shared photos of the broken drawers.

He was out with his wife when he decided to check in on the security cameras he had installed in his home.

When they saw the cameras were down, they rushed back home.

"My 85-year-old mother and five-year-old daughter were at home but my mum is hard of hearing and my daughter is too young to know anything," he said.

"We immediately realised something was amiss when we saw the cameras' wires had been pulled out.

"We then went to our bedroom and saw that our drawers had been hacked open.

"There was even a patch of blood on them."

The Stomper said the Indonesian maid had been working for them for about seven weeks since August.

She had allegedly taken $76 from one of the locked drawers and left with her passport that had arrived via registered mail from the maid agency earlier that day.

She also left behind a note that the Stomper shared with Stomp. 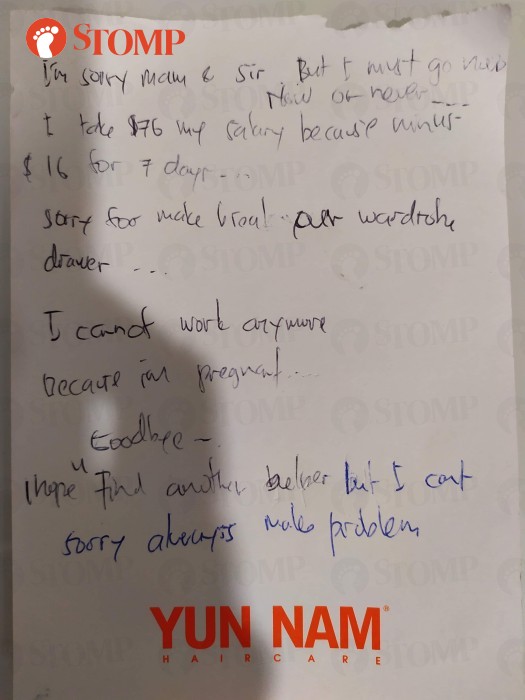 In the note, she wrote that she was sorry she must go and that it was "now or never", adding that she cannot work anymore because she is "pregnant".

She also apologised for breaking the wardrobe drawers.

The Stomper said that he had already paid the maid an extra $80 for working weekends in September and that her next payment was due on Oct 4.

"We don't think she was pregnant," the employer said.

"We often talked to her and asked her if she was happy and she said she was okay.

"Her performance was actually getting better and we were so happy about it.

"We don't understand why she would do this."

The Stomper said that the maid had left his home at about 4.37pm.

"We reported the matter to the police who later informed us that she left the country at about 5.30pm."

In response to a Stomp query, the police said they were alerted to a case of theft as servant at Block 113 Bukit Purmei Road on Sep 26 at about 5.50pm.