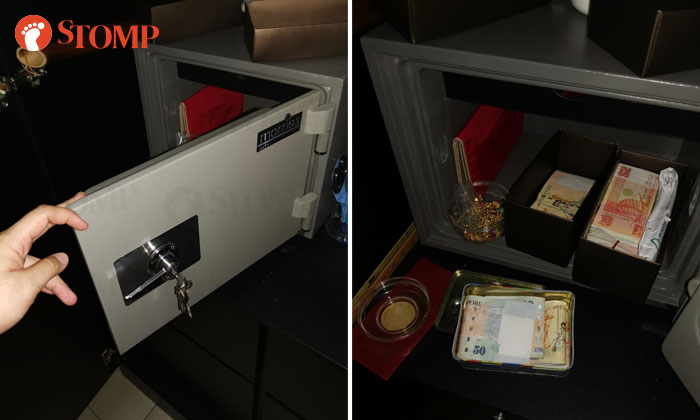 The police told Stomp they are investigating an incident where around $25,000 and two pieces of jewellery went missing from a safe in a flat at Tampines Street 83 on Sep 11.

Mr Lim informed Stomp that his brother made a police report after they discovered the items were missing from his elderly parents' safe on the same day the couple's maid had left their home. He added that the maid had taken her passport that was in the safe as well.

He said they had employed the maid in March to help his mother, 79, look after his 95-year-old father.

The couple live alone in their flat.

The maid, an Indonesian, had informed the family a few weeks prior that she wanted to return to her hometown in Tanjung Tiga, Blanakan, Subang at the end of the month.

However, she went missing-in-action last Wednesday when she had requested for a day off.

"We did not notice anything unusual," said Mr Lim.

"She left the home at about 7am that day.

"I messaged her in the afternoon as the agency was looking for her. She did not reply but I did not think anything of it at the time.

"When she was not home by about 9pm, my daughter, who was staying over that day, became suspicious.

"She found the telephone cable had been unplugged from the wall.

"They then decided to check the safe in my mother's room which is when they discovered the money and jewellery had gone missing."

Mr Lim said that his mother had around $33,000 in cash in the safe and several pieces of jewellery.

When they checked the safe, there was only $8,000 cash left.

"She did not take the three diamond rings or three necklaces in the safe either."

According to Mr Lim, his mother keeps the key to the safe in her handbag which she usually just leaves in her bedroom or in the kitchen.

"My parents feel heartbroken and betrayed," he said.

"She (the maid) was very close to my parents and would hug my mother and help my dad a lot.

"It was the first time they had ever employed a maid."

The family do not expect to get the money back but hope to get closure on what happened.

In response to a Stomp query, the police confirmed a police report was lodged and investigations are ongoing.