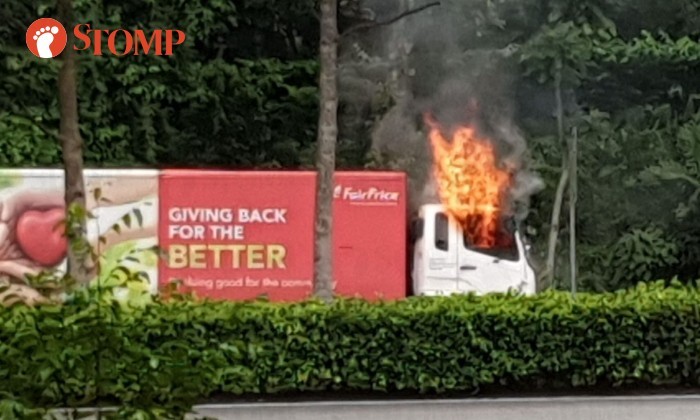 A FairPrice truck caught fire along the Kranji Expressway (KJE) towards the Bukit Timah Expressway (BKE) on Sunday (Nov 8).

Stompers Carmen and Anonymous sent videos showing the front of the FairPrice truck engulfed in flames.

In the videos, thick, black smoke can be seen in the air as onlookers stop to watch the Singapore Civil Defence Force (SCDF) personnel put out the fire.

"First, there was a loud boom at 12.30pm, then smoke started to surround the truck," Anonymous said.

"As the smoke grew thicker, I saw the driver run to the driver's seat to take something.

"In less than five minutes, at 12.34pm, the truck burst into flames.

"I called SCDF at 12.36pm and they told me that they were aware of the fire.

"They arrived pretty quickly soon after and put the fire out."

Anonymous added that the smoke affected the Housing and Development Board (HDB) estates in the area, but was quickly alleviated by the rain as it started pouring after that.

"I'm very glad that someone called SCDF before I did. I'm impressed with SCDF's swift actions," Anonymous said.

"I also believe that no one was injured because of this, which makes me feel relieved."

In response to a Stomp query, SCDF said they were alerted to the fire along the KJE near the 4km mark at 12.30pm.

"The fire involved the engine compartment of a lorry," said an SCDF spokesman.

A spokesman for FairPrice also issued a statement about the incident: "On Sunday morning (Nov 8) at 12.30pm, a FairPrice truck caught fire on the KJE before the Choa Chu Kang exit.

"The SCDF arrived promptly and the fire was extinguished shortly after. No one was injured and there was no damage to public property."

The FairPrice spokesman also mentioned that the damaged truck was towed away shortly after.

"We are working closely with the authorities to investigate the cause of this incident," added the spokesman.

"We apologise for any inconvenience caused."