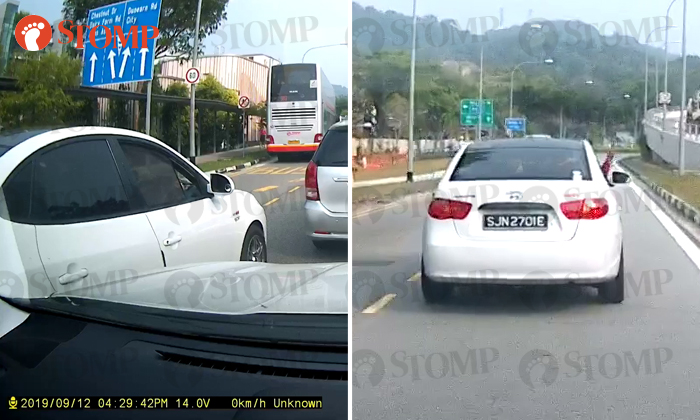 Stomper LL encountered a driver who repeatedly tried to cut into his lane and then flashed his middle finger after succeeding in doing so.

LL said the incident occurred along Upper Bukit Timah Road on Sep 12, at around 4.40pm.

The Stomper, who contributed dashcam footage of the incident, listed down what happened:

"1) This self-entitled road bully stopped in a yellow box.

"2) He tried to run me off the lane I was in MULTIPLE TIMES.

"If there is no space, don't force yourself into another lane. Wait till there's space before changing lanes. Stop being a self-entitled kid. No one is obliged to let you in.

"4) He pointed his middle finger multiple times, with his hand outside the car window."

According to LL, the driver also "shouted" an expletive at him, though that cannot be heard in the audioless video that was submitted to Stomp.

LL added: "Clearly this kid isn't very bright, doing all these with so many cameras around.

"This video is going to the police and I have lodged a report online."