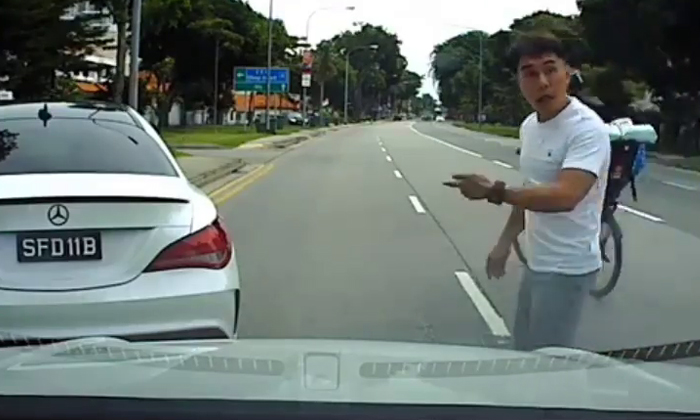 A Mercedes driver stopped his vehicle by the roadside and got out to confront a fellow motorist after getting honked at for reckless driving.

According to Facebook page SG Road Vigilante - SGRV, which uploaded a video of the incident, the dispute occurred along Upper East Coast Road on Monday (July 15).

In the video, the Mercedes driver can be seen weaving through traffic and overtaking other vehicles, including the motorist who recorded the video.

The Mercedes driver then started slowing down and making a left turn, but got honked at twice by the motorist.

This led the Mercedes driver to stop and get out from his vehicle to confront the motorist.

The motorist is heard saying, "Wa, you so fast suddenly e-brake, of course I honk at you."

However, the Mercedes driver asked, "Didn't you see the signal?"

Reactions from netizens have been mixed.

Some felt that there was more to the story and asked for a fuller video.

Others, however, pointed out that the Mercedes driver can be seen behaving recklessly even before the dispute.

Meanwhile, some people just want to watch the world burn.