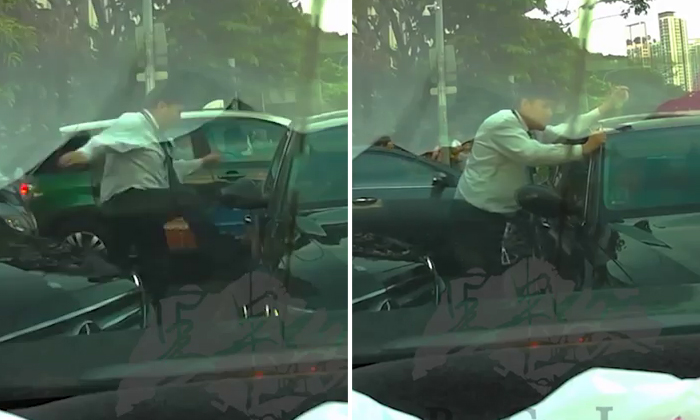 An Audi driver who stopped in a yellow box found his car at the centre of a Mercedes driver's wrath.

Facebook page Beh Chia Lor - Singapore Road posted a video of the road rage incident, which occurred at a junction outside ION Orchard on May 17, at around 6.30pm.

In the video titled "Man vs. Car in yellow box", an Audi can be seen blocking traffic after stopping in a yellow box at the busy junction.

This led a man -- dressed in a long-sleeved shirt, trousers and a tie -- to exit his Mercedes and confront the Audi driver.

The Mercedes driver can be seen shouting and gesturing angrily at the Audi driver. He also punches and kicks the Audi.

At one point, the Mercedes driver hits the Audi's side mirror, which the Audi driver then re-adjusts.

The video ends with the Mercedes driver returning to his vehicle and the Audi driver leaving the yellow box.

"Ever been so angry about a yellow-box hogger that you tried beating up his car? This guy has," said a caption accompanying the Facebook video, adding that the traffic junction was the "real villain".

Related Stories
Driver exits car to confront woman after getting honked at for blocking lane at Simon Road
Motorcyclists flung off bikes after squeezing past driver who's trying to make left turn in Tampines
Merc driver reverses into guy's car -- then shouts at him and walks away like he did nothing wrong
More About:
road rage
funny