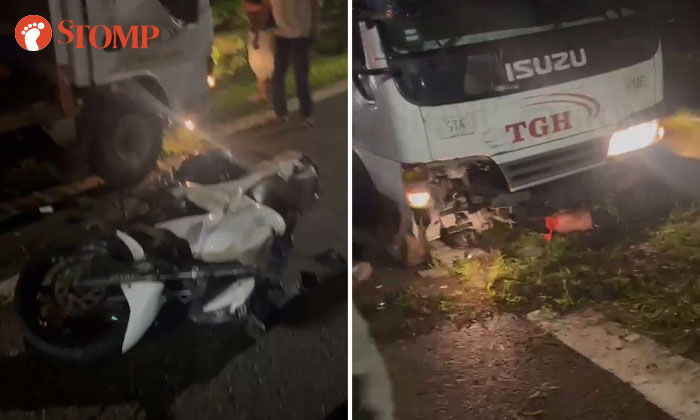 A 26-year-old motorcyclist died after his the motorcycle he was riding was involved in an accident with two lorries on the Pan Island Expressway (PIE) on Tuesday evening (Apr 6).

The 41-year-old driver of one of the lorries was arrested for careless driving causing death.

Stomper Watson alerted Stomp to the incident and shared videos of the accident that are circulating online.

In the footage, a death tent is seen next to a lorry and a motorcycle that is lying on the road.

In response to a Stomp query, the police said they were alerted to an accident involving two lorries and a motorcycle along PIE towards Changi Airport.

"The 26-year-old male motorcyclist was pronounced dead at scene by a paramedic," a police spokesman said.

"One of the lorry drivers, a 41-year-old man, was arrested for careless driving causing death."