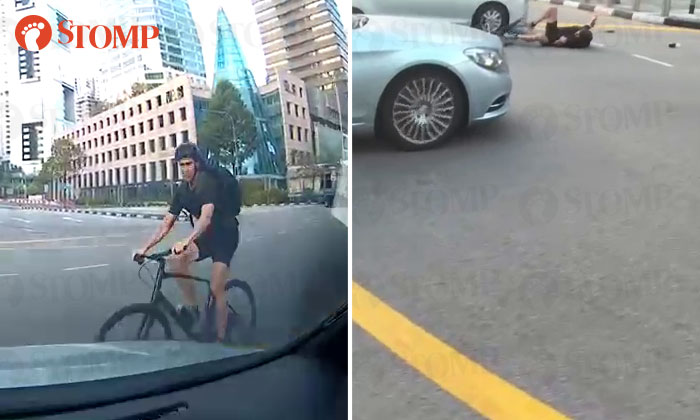 A 39-year-old cyclist was taken to hospital after he was hit by a car at the junction of Orchard Road and Scotts Road on Mar 6.

Stomper Kirby alerted Stomp to the incident and shared that his father was the driver of the car involved.

"This incident was encountered by my father who is a Grab driver," he said.

"Given that it was green light in favour of the driver, it would have been almost impossible for the cyclist’s claim of 'having the right of way as his direction is in green light' to be true.

This incident was encountered by my father who is a Grab Driver. He was driving along Orchard Road on 6th March 2021...

"This is also clearly shown in the video as well.

"Cyclist now insists that my father is [at] fault."

The Stomepr added that although his father did not suffer any injuries from the accident, he was in shock for a few days and "did not dare to drive".

"I hope you can help to share this story," he said.

In response to a Stomp query, the police said they were alerted to the accident at 7.47am.

"The 39-year-old male cyclist was conscious when conveyed to the hospital," a police spokesman said.