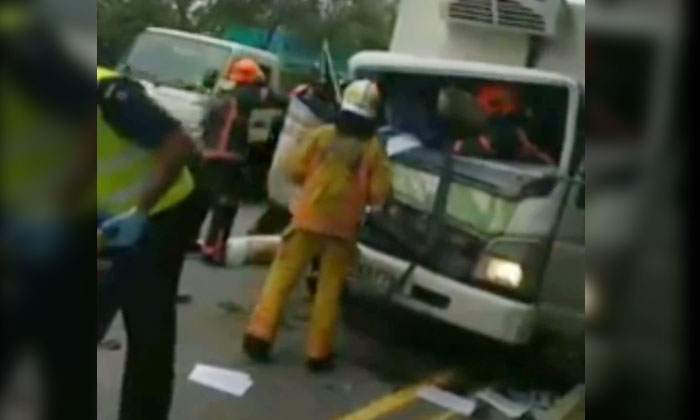 Two people were taken to hospital after an accident involving a tipper truck and a lorry occurred along Jalan Ahmad Ibrahim on Tuesday (Aug 28) afternoon.

A video of the incident was posted on Traffic accident.SG's Facebook group showing Singapore Civil Defence Force (SCDF) officers and paramedics at the scene.

An SCDF spokesman told Stomp that they responded to the accident at about 2.30pm.

The lorry driver in his 30s was trapped and rescued by SCDF using hydraulic tools, the spokesman said.

The passenger in his 20s suffered minor injuries.

In response to Stomp media queries, the police said that it was alerted to an accident involving a tipper truck and a lorry along Jalan Ahmad Ibrahim towards Tuas West Road.

"The lorry driver and passenger aged 34 and 25 respectively were both conscious when conveyed to National University Hospital," the police said.