Car rams into Honda that braked to change lanes along AYE 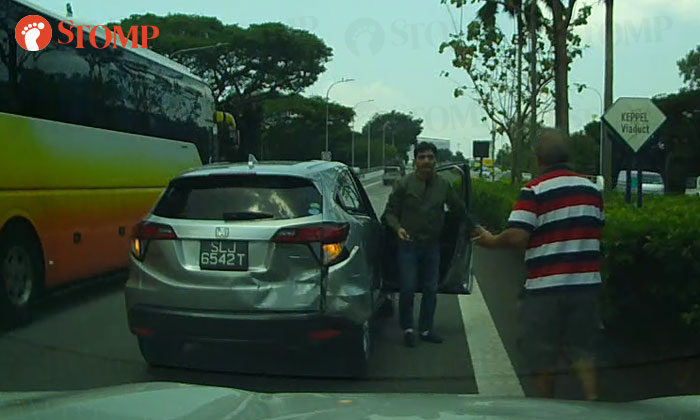 A driver crashed into the back of a Honda that slowed down to change lanes along the Ayer Rajah Expressway (AYE) on Tuesday (Aug 21) at about 12.53pm.

A Stomper shared a video of the incident that was taken from the dashboard camera of his friend's car near the Keppel Road exit.

"The Honda Vezel on the extreme right lane literally braked and stopped to filter to the left lane," the Stomper said.

"He totally disregarded the oncoming vehicle from the rear, causing him to collide into the Vezel in front.

"Can you be as reckless as that Vezel driver?"

In the video, the Honda driver pressed on his brakes and indicated left about five seconds before the collision.

This seemed a wide enough window to react in time but the car cam driver told Stomp, "I'm not at fault at all".

"The Honda driver and I could not come to an agreement," the driver said. "He blamed me for the accident and said I was going too fast."

"I feel it is unfair that he is pushing all the blame to me.

"I'm sharing this to seek justice for myself."

The driver added that the front of his car was completely damaged and predicts it will "cost a lot" to repair.